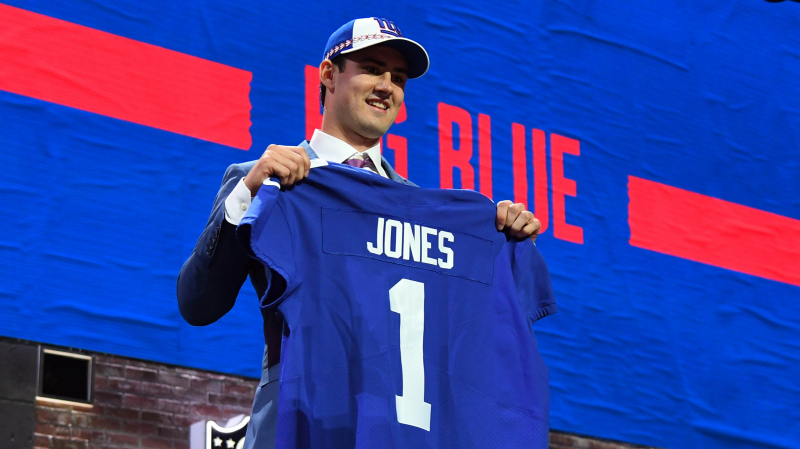 Throughout the history of the NFL (especially in recent years), we have seen how important it is for rookie quarterbacks to land in the right situations. When I say “in the right situation,” I mean with the right play caller, behind formidable protection, and have enough dynamic play makers around them.

Since there was 4 quarterbacks selected  in the top 50 in this year’s draft, I thought it would be interesting to analyze their supporting casts and see which ones are set up for immediate success.

Kliff Kingsbury’s offense is very similar to the offense Murray ran at Oklahoma (both variations of the spread offense). The only difference is that Kingsbury didn’t incorporate as many vertical concepts during his time at Texas Tech.

That said, I am sure he will be open to adjusting his play book to run what Murray does best, and that is taking shots down the field.

According to PFF, Josh Rosen is getting rid of the football in 2.5 seconds or less 58% of the time, 4th quickest amongst starting QBs in the NFL.

Yet, he is STILL under more pressure on his dropbacks than any quarterback in the league other than Deshaun Watson. Truly incredible.

Based off of how poorly the Cardinals offensive line played last season, a C might be too generous of grade. However, they did trade for an above average right tackle in Marcus Gilbert, and signed a capable yet declining guard in J.R. Sweezy who are definitely better than what they had.

As for the other starters (Mason Cole C, D.J. Humprhies LT, and Justin Pugh RG), the Cardinals chips are on the table. Meaning, they have invested a relatively significant amount of resources in them (with exception of Cole), so they have to roll with what they got. And honestly, that’s a bit unsettling, considering they all struggled last year.

Hopefully Humprhies and Pugh can get back to where they were in 2017, but this is sink or swim time for Cole.

The Cardinals did a great job of adding talent at receiver in the draft. With the additions of Hakeem Butler, Andy Isabella, and KeeSean Johnson, this group should be much improved from last year.

Not to mention that they already have David Johnson, Larry Fitzgerald, and Christian Kirk. The only thing that they are really missing is a dynamic tight end. However, Kingsburry loves to run a lot of 4 receiver sets, so that shouldn’t be a problem.

Hakeem Butler might be the only receiver I see in this group with true number 1 potential. Yet, I am still a big fan of the wide variety of skill sets that Murray has to work with none the less.

Kryptonite (aspect of their team that can cause their season to go awry): Protection

I know Murray’s most alluring quality is his mobility, but no quarterback can withstand the pressure that the Cardinals offensive line allowed last year. This group must play better, or Murray will be in for a long season. 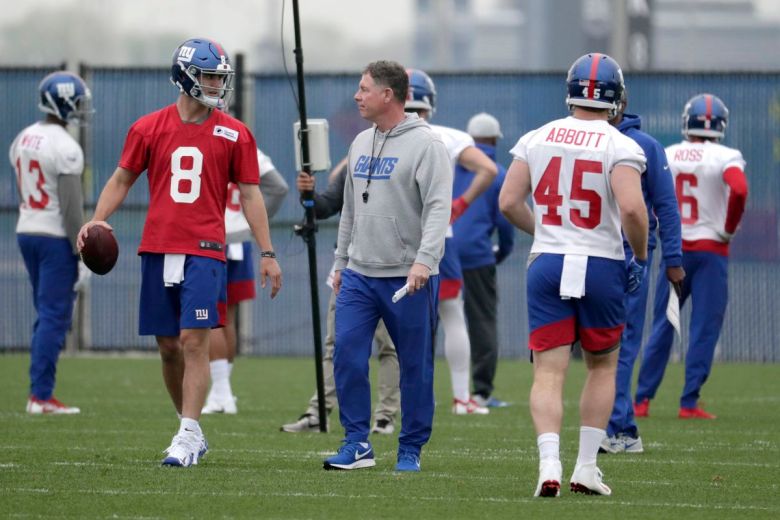 I actually think Daniel Jones fits perfectly into Pat Shurmur’s offense. Shurmur runs a traditional West Coast system that incorporates a lot of quick rhythm and timing routes that work the intermediate parts of the field. These concepts are what Jones does best.

Now, do I think that this style offense is super advantageous for scoring the most points? No, there are definitely limitations that come with not attacking all areas of the field. In terms of a pure fit however, Jones should plug in smoothly.

This…is not ideal by Chad Wheeler. Beautiful hand usage by Kerrigan on swatting the hands and ripping quick as hell pic.twitter.com/adeWm231vI

After adding Kevin Zeitler this off season, the Giants’ offensive line is actually shaping up to a be a pretty solid unit. Chad Wheeler at right tackle is the only spot they have to worry about. Having said that, if he plays like he did last year, he is an absolute liability and can hold this group back from reaching it’s full potential.

The Giants also just signed RT Mike Remmers who was cut by the VIKINGS (one of the worst offensive lines in the league), and that should tell you everything you need to know about him. Even with the addition of Remmers, right tackle still remains a major question mark heading into the season.

I would’ve easily gave the Giants’ play makers an A if they didn’t trade Odell Beckham Jr. But even without him, Saquon Barkley, Evan Ingram, Sterling Shepherd, and Golden Tate is still a more than adequate group of skill players.

Now, it is some what concerning that they don’t have a true deep threat. However, their scheme doesn’t rely on stretching the field and Jones leaves a lot to be desired as a vertical passer. So, I wouldn’t say it’s the end of the world.

We all know how important it is to protect your young Quarterback in his first couple of starts. I don’t believe the Giants can adequately do that with Chad Wheeler or Mike Remmers at right tackle.

When evaluating Dwayne Haskins, it was evident that the right scheme would be very crucial for his success. Luckily for him, he landed an offense that caters to his skill set. Like Pat Shurmur, Jay Gruden runs a traditional West Coast offense. Meaning a lot of timing and intermediate passing concepts.

I love this fit for Haskins because he is most comfortable throwing with timing and working the intermediate parts of the field. There is going to be a bit of a learning curve for Haskins, coming from Urban Meyer’s spread system. Yet, I believe he will have an easier time transitioning than most because he fits it so well.

Out of all the rookie quarterbacks, Dwayne Haskins’s protection is the most critical for his success. He is a prototypical pocket passer and doesn’t possess the mobility skills to evade pressure. Fortunately for him, the Redskins have one of the better offensive lines in the league when healthy.

In terms of a running game, the Redskins have an awesome stable of backs. Derrius Guice, Adrian Peterson, Bryce Love (if he plays), and Chris Thompson is more than enough depth to maintain a strong running attack. However, their group of perimeter play makers leaves much to be desired.

– Efficient release off the LOS. No false steps.

– Uses the slightest of hand tugs to take advantage of his leverage.

– Enormous separation and gone to the races.

It’s hard to expect much from Josh Doctson, Paul Richardson is really just a one trick pony, Jordan Reed is terrific when healthy, but is always hurt. I liked the additions of Terry McLaurin and Kelvin Harmon. But they don’t push the needle enough for me to say that receiver isn’t a need anymore.

I believe this group is fine for the time being, but Washington must look to improve it moving forward.

Haskins played with a loaded group of receivers at Ohio State. They all thrived at creating separation, which gave Haskins a lot of clean throwing windows. Besides McLaurin and Reed, I don’t see any other pass catchers on this roster that create a lot of separation.

That troubles me because I don’t think Haskins is a precise enough of passer to consistently fit the ball into to tight windows to big bodied receivers. So, Haskins might have some trouble trying to adjust his style to his receivers (or vice versa).

Denver brought in Rich Scangarello over from the 49ers to be their offensive coordinator and play caller. So, I imagine he is going to run similar offensive to what Kyle Shanahan runs. Meaning a lot of West Coast concepts and play action bootleg.

In terms how that system fits Drew Lock, I kinda like it. I don’t necessarily love him operating the quick passing game, but I do think he could thrive in those horizontal play action plays that are staples in a Shanahan offense.

Lock will have to make some adjustments, considering he has never really operated under center before, and that is a major component of this offense. If he can master the playbook, I believe this scheme can get the most out his skill set.

If Bolles doesn’t show any signs of improvement under an elite offensive line coach like Munchak, I have some serious questions about him protecting Drew Lock for the immediate present and foreseeable future. 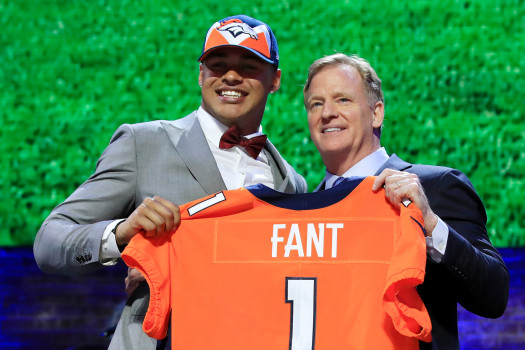 Adding Noah Fant to compliment Emanuel Sanders, Courtland Sutton, and DaeSean Hamilton makes this a surprisingly well rounded group of pass catchers. Like the Cardinals, I love how this core is built like a basketball team. Meaning each receiver has a niche. This seems like the most effective blueprint in today’s NFL.

If Drew Lock doesn’t adjust to the new scheme, then obviously he is going to have some hiccups. However, I really believe that Garrett Boles is just as important in this equation.

One of Lock’s biggest concerns is his inability to manipulate the pocket and feel pressure. That said, if Bolles can’t protect his blindside (pressure that Lock can’t see), then Lock is going to struggle mightily.

The 2019 quarterbacks ended up in far better situations than the 2018 quarterbacks. Sure, none of them landed on a Super Bowl contending roster but it could be a lot worse.

I believe each team has enough pieces in place to where if each quarterback played/had to play in their first season they could be mildly successful (5-8 wins). Even though Murray and Haskins are the only ones that I anticipate to see the field as rookies.

The only team that has any shot of sniffing the playoffs (even though I still think it’s very unlikely) is the Cardinals in my opinion, and that is because of Kyler Murray.

The opposite goes for other teams, in the sense that I don’t think the other quarterbacks can have that much success right away. That is because they either have much more developing to do, aren’t as talented as Murray, or both.