With the temperatures beginning to swelter and the calendar preparing to flip to July, baseball is already starting to ready itself for the latter half of the season, signified by the Midsummer Classic coming up in a couple weeks.  As voting concludes on the 27th of June and rosters are revealed, I wanted to give my take on players who have been the most deserving of a trip to Cleveland to play in the All-Star game this year, position-by-position, specifically from the National League.

(Note: These are not predictions based on the voting results that have been revealed, instead these are the players I feel are most deserving of a spot on the roster.  I have included my prediction on who I think the fans will vote in from the final round below each position.)

All stats are current entering play on June 26th, 2019.  All stats courtesy of FanGraphs, MLB.com, and Baseball Reference.

Grandal had a really rough finish to last year’s season with the Dodgers.  Following a fairly productive 2018 regular season in which he led all NL catchers in home runs, Grandal’s nightmare Game 1 in the 2018 NLCS against the Milwaukee Brewers, in which he committed 2 errors and had 2 passed balls, changed the narrative of his entire body of previous work.  In the offseason he left the Dodgers and Grandal ironically signed in Milwaukee where he has continued to produce at a high level.  Yasmani trails Willson Contreras just slightly in terms of OPS. and RBIs, but he has the most home runs of all National League catchers.  He also leads catchers from both leagues in WAR.  Grandal’s elite pitch-framing ability and quality defense behind the plate, combined with his production with the bat warrants him as an All-Star starter in Cleveland this July.

In this year’s edition of All-Star voting, Major League Baseball decided to have a first round of voting which culminated in three finalists that would move on to a second election to determine the starter from the smaller pool.  Somehow, Pete Alonso didn’t make it to that second round. As a result, he won’t be starting for the National League, but he certainly deserves to. Alonso leads all NL first basemen in the all-inclusive WAR, trailing only Cody Bellinger, Christian Yelich, and Ketel Marte among NL position players (all of whom I have selected as deserving All-Stars).  Alonso is a very good representation of where much of the league is going, as he has struck out 84 times in 79 games but has also mashed 27 home runs, which is good enough for 2nd-most in the league. For comparison: Freddie Freeman, who is 2nd among 1B in HRs and also a leading 1B candidate in fan voting, has 21 bombs in 25 more plate appearances than Alonso.

Not many people saw this breakout season by Ketel Marte coming.  Since going to Arizona from Seattle three years ago, Marte had been an average part of an average team.  While the Diamondbacks are part of the bottom tier in the ultra-competitive NL Wild-Card race, Marte has come onto the scene as one of the best second basemen in all of baseball and is a integral piece of the Snakes’ future.  He ranks 4th among all position players in the Majors with 3.7 WAR and his slash line of .314/.363/.584 is tops among all NL second basemen.  Most impressively, Marte has 20 HR on the season.  As a switch-hitter, 11 of them have come as a righty and 9 as a left-handed hitter.  No one in MLB history has ever had 10 or more home runs from each side of the plate before the All-Star break.  No one.  Ever.

Nolan Arenado is one of the most elite third basemen that baseball has to offer.  The 2019 NL All-Star team could sure use his services.  Again.  Arenado has made the All-Star team in each of the last 4 seasons, including starting the last 2 years.  He has won a Gold Glove every single season since entering the league in 2013, and also has been a Silver Slugger the last 4 years.  Arenado still hasn’t won an MVP award, but he has finished 3rd, 4th, and 5th in voting the last 3 seasons.  In 2019, Arenado has continued to be great.  His .321 AVG and 62 RBIs lead all third basemen in the whole league.  While Anthony Rendon of Washington has also had a great season, Arenado gets my pick because of his superior defensive prowess at the hot corner.  He has turned the most double plays and also has the most assists of any third baseman in all of baseball.

Story, another member of the Rockies, has enjoyed another stellar season in Denver.  He has the best OPS. among all shortstops and only trails Cincinatti’s Jose Iglesias in batting average.  While playing at hitter-friendly Coors Field is always good for a hitter’s stats, Story has also been very good defensively.  The partnership of Story and Arenado on the left side, both offensively and defensively, has been a key reason to why the Rockies are currently tied for the 2nd Wild-Card spot in the National League.  Paul DeJong and Javier Baez’s impressive first halves make this a tough decision, but Story’s improved play defensively gives him the nod.

Bellinger and Yelich are pretty much absolute locks to start.  They made the NL MVP conversation into a two-horse race very quickly, with Bellinger having the slight edge so far. 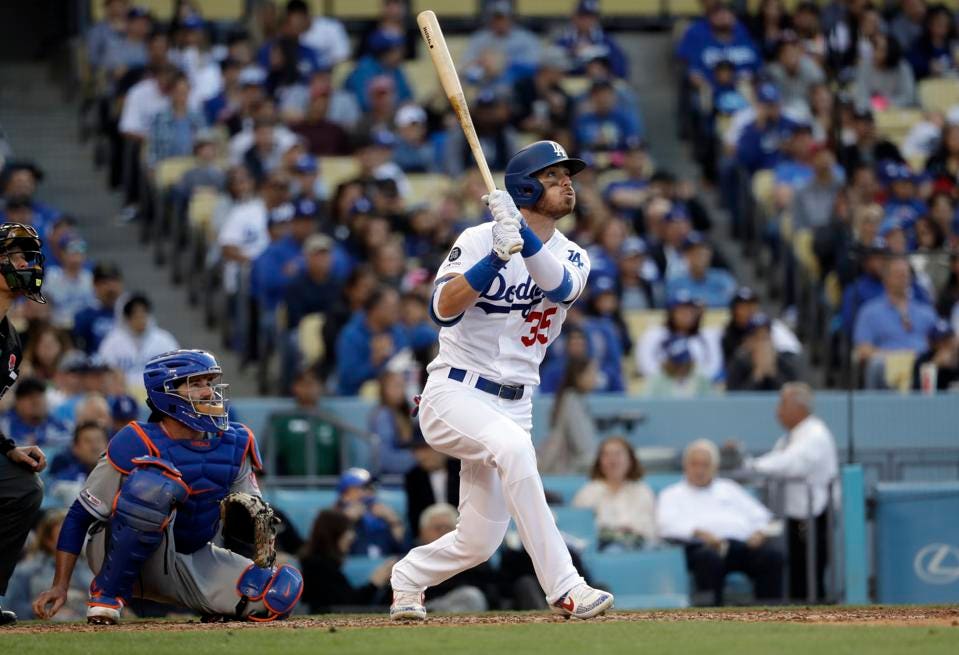 After Cody Bellinger’s standout Rookie of the Year season in 2017, he struggled to match that production in his sophomore season.  He still had a fairly productive year, hitting 25 home runs, but his OPS. dropped .119 points and he also had 19 less RBIs than the year before, despite playing 30 more games.  In the offseason, there were also rumors that Bellinger was a talked-about piece in a potential trade between the Dodgers and the Marlins which would’ve sent J.T. Realmuto, now playing in Philadelphia, to Los Angeles.  Andrew Friedman and the Dodgers front office have to be relieved that they held onto Cody.  Bellinger’s resurgence has included a slash line of .353/.450/.702, matching his home run total of 25 from last season already, and leading the Majors in batting average.  After missing out on the Midsummer Classic last year, Bellinger is the leading vote-getter as a frontrunner for the MVP award, and is also the best player on the best team in baseball right now.

Christian Yelich is the other competitor in the MVP race, and being behind Bellinger in the theoretical challenge is no knock to Yelich.  Yelich actually has a higher OPS. than Bellinger, largely in part to a superior slugging percentage that is carried by his Major League-leading 29 home runs.  The reigning and nearly unanimous NL MVP, Yelich hasn’t missed a beat in the repeat campaign.  Since being traded to Milwaukee, Yelich’s combination of elite hitting paired with excellent fielding at all three outfield positions have established him as a perennial All-Star for years to come.

While not nearly as good as the previous two players, Ronald Acuna Jr. has followed up his impressive Rookie of the Year campaign with a stellar first half of his sophomore season.  After a mild slump in the beginning parts of the year, he has steadily improved and is the face of the Atlanta Braves.  Acuna has 19 home runs, an OPS. of .877 and his elite speed on the basepaths has also helped him to steal 10 bases.  At just 21 years of age, Acuna being this good so early in his career is a real joy to watch, and it’s only going to get better from here.

The starting pitcher for the All-Star isn’t picked by the fans, but by the manager.  With Dodgers’ manager Dave Roberts slated to lead the NL squad into Cleveland, the best pitcher on his Dodgers team, Hyun-Jin Ryu, seems likely to get the nod.  However, Ryu being the starter won’t be the result of favoritism or bias from his manager.  Hyun-Jin Ryu has been the best pitcher in all of baseball this season.  On a staff with a generational talent like Clayton Kershaw, Ryu has solidified himself as the No. 1 choice for the best team in baseball at the moment.  Despite having an injury-plagued year last season, Ryu finished it out strong and pitched well in the postseason, well enough to convince the Dodgers to bring him back for 2019 on a $17.9M qualifying offer.  He has rewarded their loyalty by putting up ridiculous numbers.  His league-leading 1.27 ERA and 0.838 NL-leading WHIP have been huge factors in helping the Dodgers accumulate the most wins in baseball.  His K to BB ratio of 15 leads the Majors by an extremely wide margin, with the 2nd best ratio belonging to his teammate, Walker Buehler, at 7.69.  As long as Ryu stays healthy throughout the season, he won’t simply be a candidate to start the All-Star game, but he’ll be a favorite for the Cy Young as well.