Just a little over a month remains in the 2019 MLB season.  Usually by this time of year there are a few teams vying for the final wild card spots in each league, or a division that is hotly contested until the season finale.  However, this year, nearly half of the league is still in somewhat realistic contention for a playoff spot with just one month to go.  Despite the multitude of clubs still with a mathematical chance to win, it is important to begin focusing on the real contenders.  The teams with a real, legitimate argument to lift the trophy at the end of it all.  Here we’ll take a look at the top 5 teams in contention and how they are faring heading into the playoffs.  These are not power rankings, instead ranking how well-equipped each team is to win it all this fall.  (All stats are accurate as of September 11, 2019)

In 2018, the Twins didn’t even make the playoffs.  They were a relatively solid team in one of baseball’s weakest divisions, but the Twins weren’t looking like a legitimate contender anytime soon.  Adding Marwin Gonzalez, Nelson Cruz, and Jonathan Schoop to the team has helped construct the most powerful lineup in all of baseball.  The Twins lead the majors in home runs this season, and Miguel Sano returning to full health only adds to that power.  Jose Berrios and Jake Odirizzi headline a decent starting rotation, but the Twins pitching staff just won’t be enough in the American league.  The Twins can score runs in a hurry, but the lineups of New York and Houston will have no problem mashing against Minnesota.  A promising season for the Twins will end prematurely, but if everything can go right, their offense just might give them a chance.

The Braves have been absolutely surging as of late.  Sparked by a series win over the Dodgers last week, they followed by sweeping both the Marlins and the Mets.  The Nationals have been one of the hottest teams in baseball, but the Braves have all but cemented their status as the NL East champion this year.  Ronald Acuna Jr. is an absolute superstar, and his teammates are very good players themselves.  Atlanta is very solid on both sides of the ball, and they have a roster full of playoff experience after last year’s battle with the Dodgers.  Over the deadline they shored up their bullpen which was their big glaring weakness.  At first, it looked like a horrid failure to upgrade the ‘pen, but the newly-acquired relievers have come around as of late and are going to make Atlanta tough to beat in late innings come October.  The blend of youth, experience, and talent is going to make Atlanta a tough-out this postseason.  Their experience from last year combined with the recent victory over L.A. is only going to help them if they meet up in the NLCS.

The top 3 teams in this list, beginning with the Yankees, are in another tier by themselves.  New York is an inevitable lock to make at least the ALCS this year, and it wouldn’t surprise many to see them as champions of the entire league.  Power is something that is associated with this team, led by Aaron Judge, Giancarlo Stanton, Didi Gregrious, and countless others.  While the starting rotation can be somewhat inconsistent at times, New York’s bullpen is rock-solid.  Zach Britton and Aroldis Chapman refuse to give up leads at the end of games, which makes it tough for opponents to offset the deficits created by the Yankees’ strong lineup.  This is a team with postseason experience and real talent.  They flexed their muscles this past weekend against the Dodgers in what could be a World Series preview.  The only knock on this team is against their starting rotation.  Domingo German has been a star this year, but no starter in the rotation has an ERA lower than 4.00.  That’s going to be a problem against the bats of teams like the Astros, Dodgers, and Twins. 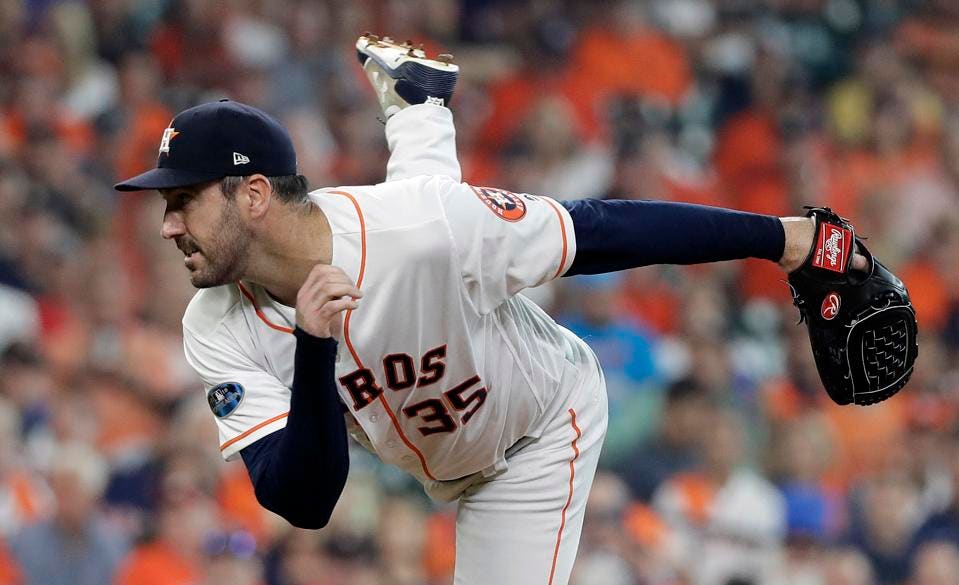 The Astros are arguably the most well-built team in baseball.  Their lineup is scattered with elite hitters at all levels, they bolstered their starting rotation to make a horrifying 4-man rotation for opponents, and their bullpen holds down any leads that the offense can make.  Facing Justin Verlander, Gerrit Cole, Zack Greinke, and Aaron Sanchez in a 7-game series is no fun for anyone, and once they leave the game it doesn’t get any easier.  On the offensive side of the ball, the Astros have gotten pleasant breakout seasons from Yuli Gurriel and Michael Brantley that have complemented the usual All-Star production from their other hitters throughout the lineup.  They went all-in at the deadline to acquire Greinke and Sanchez, and have built a team that has every chance to be the favorite in the Fall Classic.  Having won the World Series 2 years ago, this team has all the experience it needs, and has virtually no weaknesses.  The only reason the Astros aren’t the favorite isn’t because of anything they’re lacking.  There’s just another team that is stronger.  If Houston ends up as the champion it won’t be of any surprise.

L.A. has slipped up a little bit as of late, but the Dodgers just seem destined to finally get that trophy this year.  2 straight years of losing in the World Series has hurt the city, but it has only motivated the team to come back hungrier.  Led by Cody Bellinger, the likely MVP, and an all-around talented team, the Dodgers are on a quest to finally claim their title.  They have deadly hitters at almost every single position, and have elite depth.  Their starting rotation boasts the league leader in ERA, Hyun-Jin Ryu, and stars like Clayton Kershaw and Walker Buehler.  However, the Dodgers do have one glaring weakness.  At the trade deadline this year, L.A. failed to significantly upgrade their bullpen, which was something that has hurt them at times this season.  Kenley Jansen has struggled with his velocity and location this year, leading to blown saves and diminished confidence.  However, given the experience throughout the whole club, the Dodgers will be well-prepared for victory in the postseason, no matter who they face.  Especially given the narrative of their past failures, L.A. will be ready to avenge their losses.  Strong, disciplined hitting, combined with quality pitching and a world-class defense, makes the Dodgers the team to beat come October.