With the NBA season quickly approaching, it is time to introduce a fresh set of power rankings for the Association.  For the preseason specifically, I’ve split it up into two halves of rankings, the bottom half, and the top half to be released next week.  These rankings are based on team performance and overall quality of play.  While the preseason isn’t an accurate indicator of a team’s regular-season performance, teams have given us a basic idea of where they stand with their current rosters and star power.

The Hornets barely missed out on the playoffs last year, but this year will be much different.  They lost their all-time leading scorer in Kemba Walker to the Celtics and also saw valuable role players Jeremy Lamb and Frank Kaminsky depart in free agency.  In return, they signed Terry Rozier, someone who didn’t average even 10 points a game last year, to a three-year, $58 million contract.  He’ll have plenty of opportunities to increase that average this year on a Hornets team lacking any significant talent.

Honestly, Washington isn’t actually that bad.  Bradley Beal is a superstar shooting guard, Rui Hachimura is going to be a really solid NBA player, and they also signed Isaiah Thomas who I think will have a bounce-back year.  However, compared to the rest of the league, Washington will struggle to keep up.  Five-time All-Star John Wall remains crippled on the sideline and Beal still hasn’t accepted the huge contract extension from the team.  This is a team that will see flashes of potential, but that lacks the quality to win enough NBA games.

What is Kevin Love still doing in Cleveland?  The former All-Star has his skill wasting away on a team that still doesn’t have a direction after the loss of LeBron.  A year after selecting Collin Sexton, the Cavs used their lottery pick on another point guard in Darius Garland.  While current-day basketball is truly positionless, one has to wonder if the pick could’ve addressed Cleveland’s multitude of other needs.  Love will likely get traded sometime before the deadline, draining Cleveland of the small amount of elite-level talent in the squad that was still left.

Ja Morant and JJJ are going to form quite the formidable duo in Memphis.  Morant has real superstar potential, and Jackson Jr. looks set to continue his ascension in his sophomore year.  Brandon Clarke looked like a diamond in the rough at the Summer League and De’Anthony Melton is a sneaky-good guard, especially on the defensive end.  This is a team with a newfound identity and lots of potential, but potential only means so much in the present. 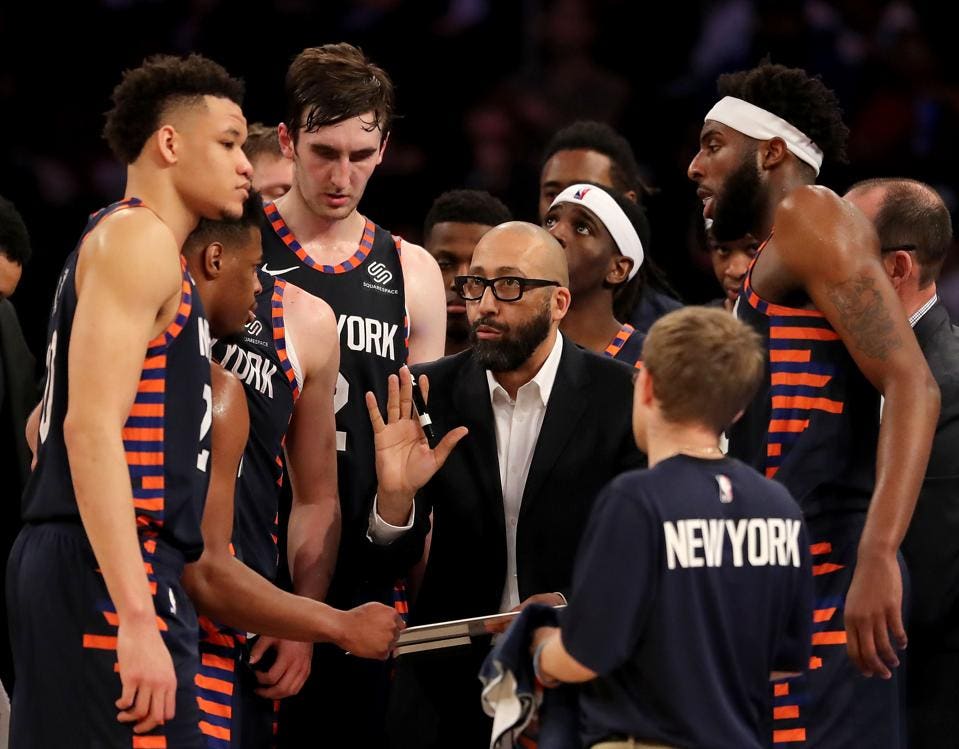 New York didn’t get Zion, but they did get a guy who might end up having just as good a career, if not better, in R.J. Barrett.  After a year at Duke, Barrett appeared destined for the bright lights of New York and I think he will embrace the limelight and thrive.  Combining with the dominant inside presence of Mitchell Robinson, new arrival Julius Randle, and the other solid pieces of the young team should result in some wins.  However, this is a team that is still very much a work in progress.  They have bigger visions for bigger fishes in the summer, but for now, they’re all about developing the talent they have currently.

Lauri Markkanen looks like the complete package for a modern-day big in today’s NBA.  He’s really really good.  Coby White and Daniel Gafford also made up a pretty impressive draft haul for Chicago.  I think Gafford especially will turn into a draft-night steal.  However, this Chicago team lacks any true identity.  Jim Boylen isn’t the right fit for this squad, but he and LaVine will likely be the main faces of the franchise, at least early on in the season.  Without an identity, this team won’t be able to capitalize on their talent.

This is a Detroit team that made the playoffs last year and added Derrick Rose in the offseason.  Apart from that, they added a couple of veteran pieces and took Sekou Doumbouya in the draft.  Blake Griffin continues to prove he is much more than a dunker and his knee injury from last year could prove a reason to why the Bucks so easily swept Detroit in the first round.  While playoff spots in the East look up for grabs, Detroit didn’t get significantly better.  They might be good enough to sneak into the playoffs again, but they have no chance against a team like Philly or Milwaukee.

The T-Wolves have had the pieces they’ve wanted for the past couple years, but they just never seem to string together enough wins to be a very successful team.  KAT is an elite talent, but the rest of the pieces around him just don’t put them over the top.  Wiggins struggles with his efficiency too often and losing Tyus Jones has resulted in instability for the future of their point guard depth.  Drafting Jarrett Culver was a solid move, as was signing role guys like Jordan Bell and Jake Layman.  This is a Timberwolves team that has the chance to surprise lots of people if everything clicks right. But if anything goes wrong like I suspect, this could be a dumpster fire waiting to happen.

Phoenix is a lot better than most people think.  They’ve finally paired Devin Booker with a serviceable point guard in Ricky Rubio, who I think complements him very well.  Rubio’s playmaking ability and improved skill of spreading the floor will help create space for Booker to operate.  While DeAndre Ayton still has to work out the defensive kinks, he is a walking double-double and will only continue to improve.  I think the rest of their roster is sneaky-deep, with guys like Kelly Oubre, Jalen Lecque, Malik Bridges, and Dario Saric all expecting to make an impact.  This Suns team has been bad for a while, but the potential is going to finally start paying off into some wins.

Just like Phoenix, this Atlanta team is going to surprise lots of people this year.  Trae Young and John Collins are both legitimate stars in the league, even at such young ages.  They also had one of the best draft hauls of the year, bringing in two guys with superstar potential on both sides of the ball in Cam Reddish and DeAndre Hunter.  Putting all of this together with the continued rise of Kevin Huerter and new signings Evan Turner and Allen Crabbe, Atlanta can make some real noise in the Eastern Conference playoff race this year.

I would have Indiana ranked higher if Victor Oladipo was healthy, but for now, they check in at No. 20.  Sabonis and Myles Turner will form one of the most underrated front-courts in the league, while the trade for T.J. Warren will provide Indiana with the scoring punch they so desperately needed.  If Oladipo can return and get back into elite form by playoff time, the Pacers could be a darkhorse candidate to advance deep into the playoffs.

OKC is much better than the No. 19 spot in these rankings.  However, Chris Paul might turn things sour for the Thunder this season.  His desire to leave will make itself known throughout the season and cause some turmoil for this young team.  OKC actually got back a ton in the Paul George trade and they are better off for it.  If CP3 stays happy, this is a team that can legitimately compete with the juggernauts of the West.

For all of the bigs that the Kings have had over the years, it finally appears that they have found their core of guards for the future.  Fox and Hield are legit, and combined with Bagley, Bogdanovic, and Ariza, the Kings will be a lot to handle all year.  Bringing in Holmes and Dedmon to pair with Giles off the bench was also a smart move by the front office.  Playing in the same division as Golden State and both L.A. teams will make things hard on Sacramento, but they have the talent to get enough wins against non-division teams and push for the playoffs.

Orlando has built its team around size, length, and sheer athleticism.  Guys like Mo Bamba, Jonathan Isaac, Aaron Gordon, and Terrence Ross all fit that mold.  Another guy with size, Nikola Vucevic, is an All-Star and can carry this team on his back.  They also have an elite scorer in Evan Fournier who is coming off a productive FIBA World Cup campaign with France.  Orlando has also built their team by taking gambles, the biggest of which, looks to be paying off as Markelle Fultz looks ready for a breakout season after hopefully figuring out his jump shot.  Orlando gave Toronto a scare in the first round last year, and with the possible emergence of Fultz, they should be primed to take the next step and be a legitimate threat to any teams in the East.

The Spurs somehow manage to make the playoffs every single year.  In fact, they’ve made it 22 straight years, a streak that is unprecedented in major sports.  Placing them at No. 16 just feels wrong.  The return of Dejounte Murray and the breakout year for Derrick White has given their backcourt a huge boost, as if having DeMar DeRozan wasn’t already good enough.  A first full season for Lonnie Walker should also benefit their squad as they look to return to the playoffs for the 23rd straight consecutive season.