The north is going to be a must-watch division with top headlines from each team. Will Big Ben return from his injury healthy? What is Joe Burrow’s first season going to look like? Does Lamar repeat another MVP-caliber season? Will Baker Mayfield be out of Cleveland with no playoff berth? All these are questions that are going to be answered as the season goes on. For now, let’s take a look at how I think the each team will finish in 2020: 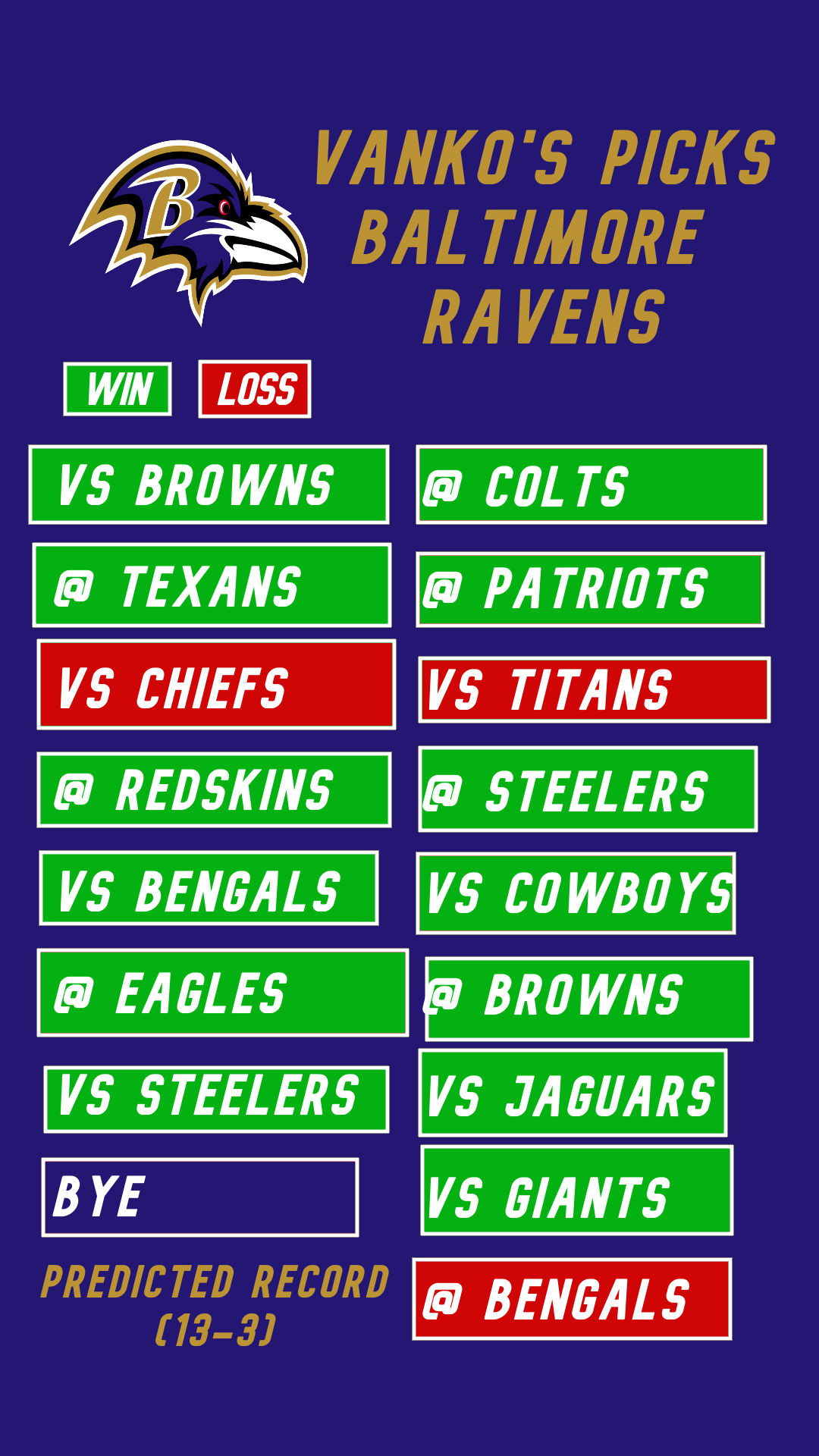 I think this prediction is very accurate, considering the season the Ravens are coming off of. Lamar Jackson put up one of the best performances as a quarterback in NFL history and looks to do just that in 2020. I have the Ravens taking their first loss to the defending champs. Even though this game is home for Baltimore, I have more faith in the Chiefs.

Patrick Mahomes can light up the passing game and his ability to make plays is unlike no other. It’s certainly a game you want to mark your calendars for because it’s going to be a good one. After the loss, the Ravens will go 4-0 into the bye week. The Redskins and Bengals game look to be blowouts right now and the Ravens are the better team against both Pennsylvania squads.

After the bye is where Baltimore suffers their second loss. It’ll be deja vu for the Ravens as I have them losing to the Titans. Just like the divisional matchup, the Titans are going to be coming in desperate for a win, especially in a crowded AFC South. I think this is the Ravens’ “upset loss” for 2020 and possibly a sneak peek as to what a fellow conference playoff team will look like. It will be a much closer game though. I don’t see the Titans running away with this one like the divisional game, but I do see them getting the win in the end.

The rest of the way is going to be a little bit of a test for the Ravens as they face the Steelers and Cowboys, both of which I have as wins for the Ravens. At the end of the year, they’ll be 13-2, resting their starters and will take a loss to the Bengals. I do believe some of their games will be closer than the dominant performances they put on last year. Baltimore will still be a fun team to watch and should be yet again a Super Bowl favorite throughout 2020. 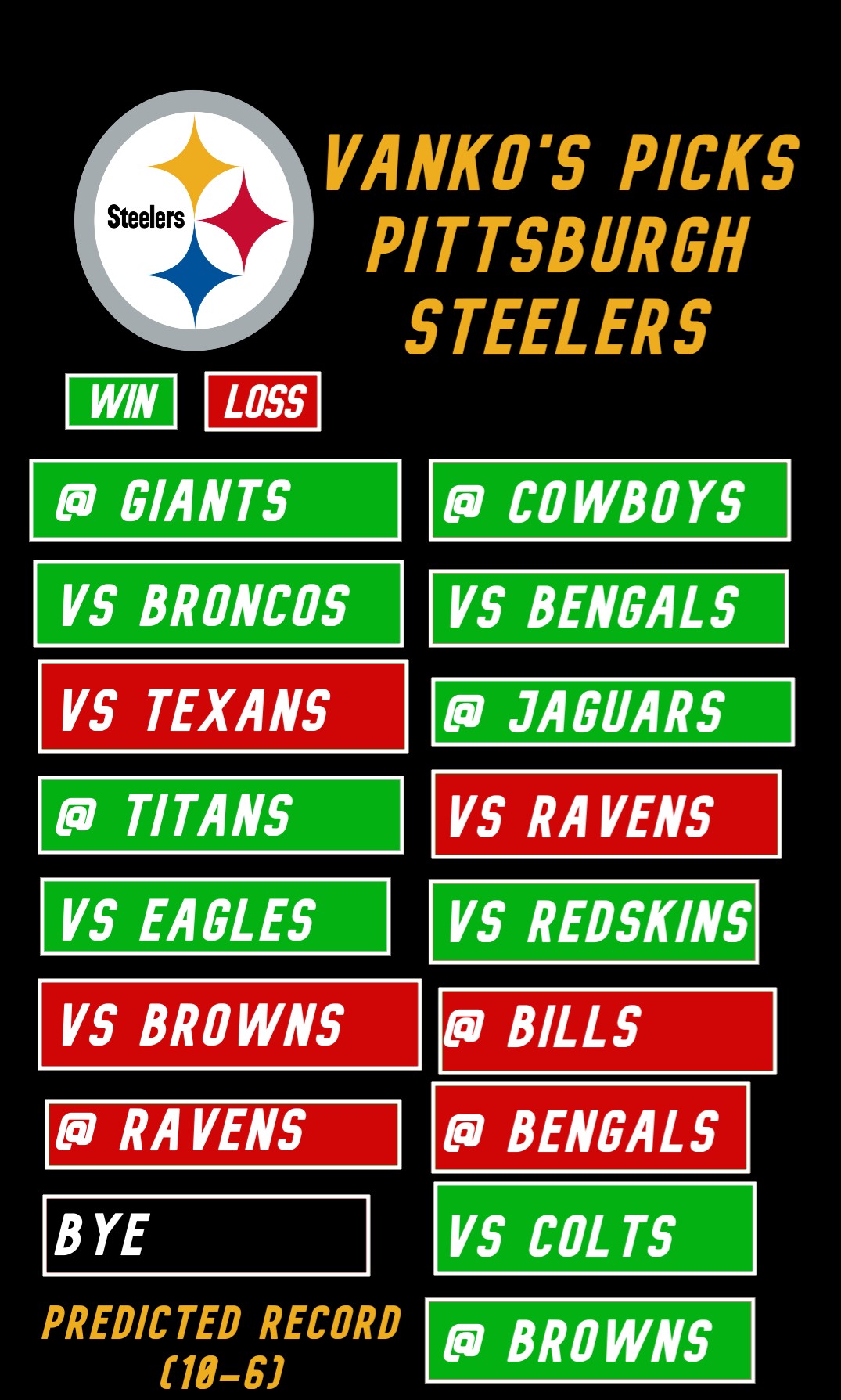 This season is all contingent upon whether or not Big Ben will return healthy. If he does, then my 10-6 prediction will likely be true. If he doesn’t return healthy, then my prediction can change. That being said, I made them assuming he returns healthy and ready to go. Their first loss is going to be against the Texans at home. This game could go either way, but Deshaun Watson is the better quarterback.

They’ll be able to get wins over Tennessee and Philadelphia, who are both playoff teams, but not strong playoff teams. Before the bye, I have the Steelers suffering back-to-back losses. I think at this point in the season, Baker Mayfield will be fighting for his team to get into the playoffs and also for his job. Then, Pittsburgh travels to Baltimore, who will be red-hot all year, so I have them going into the bye at 4-3. After the bye, the Steelers come out with 3 straight wins over Dallas, Cincinnati and Jacksonville.

The Dallas matchup is going to be the toughest of those three, and I trust Pittsburgh’s coaching and team more than I trust that of the Cowboys. They will once again lose another division matchup against the Ravens because I like Baltimore that much, and this is where the playoff race is heating up. I have Pittsburgh losing back-to-back games against Buffalo and Cincinnati. I think this is when Josh Allen turns on the jets and proves to be a solid quarterback who can lead his team to possibly a conference championship game, and this is where Joe Burrow can shine.

It’s a solid opportunity to prove he can win against good teams, and I have the Bengals pulling off a huge upset win. At this point, the Steelers sit at 8-6 and are pushing to keep their playoff hopes alive. They will get a win over the Colts to ultimately eliminate them from contention and then beat the Browns to spoil the party there as well. Again, this is all based on if Roethlisberger comes back healthy and plays like he did before. I think he will and the city of Pittsburgh will see playoff football once again. 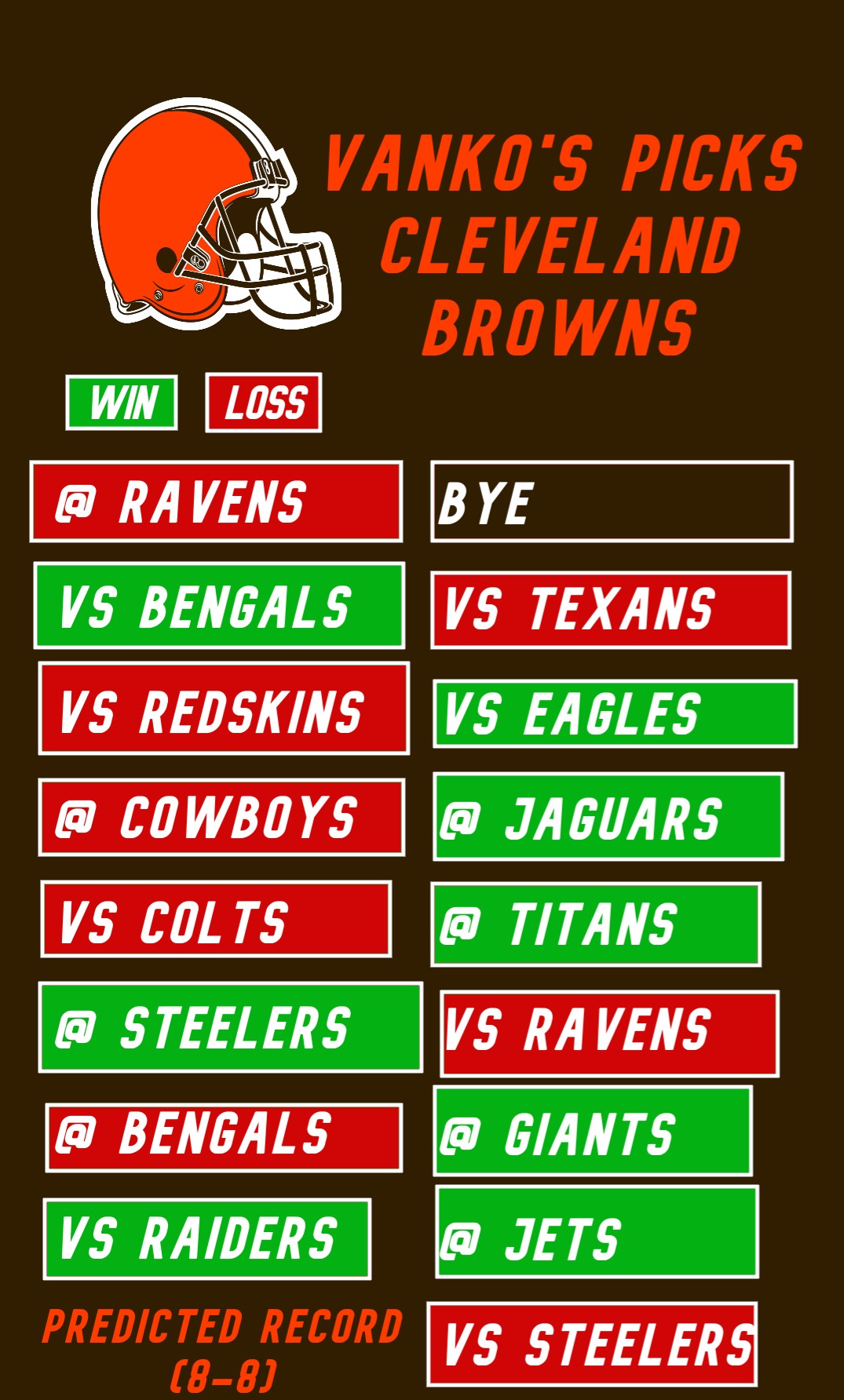 This has to be the year the Browns get to the playoffs. Everything is set in place for them to have a winning season and clinch a playoff berth. Hopefully they won’t go 8-8, like I have them predicted. They have stars all over the place in Jarvis Landry, Odell Beckham Jr., and Baker Mayfield just to name a few. Unfortunately, I have the Browns opening with a loss against Baltimore.

I don’t think there is much argument with that one. They will get a win over the rebuilding Bengals, but then hit rock bottom with a three game losing streak. The Redskins will pull the upset, the Cowboys are the better team, and I think the Colts will sneak one by to pick up the win. However, I have the Browns getting a big win over their division rivals, the Steelers.

However, the big win celebration comes to an end when the Browns travel to Cincy to take a loss. Why? I think Burrow is going to struggle on the road this year but preform really well at home. So, entering the bye, I have the Browns slated at 3-5. Coming off the bye, I have them taking a loss to Houston, but then picking up three straight wins. The game against the Eagles could be a sleeper that many people won’t watch, but I think it will be a pretty good game. The Titans matchup should also prove to be a good one as well, especially considering last year’s game in Week 1.

They won’t get the win over the Ravens, who are preparing for the playoffs at this point in the season. Weeks 15 and 16 will be an extended stay in the New York metropolitan area where they pick up 2 wins over both the Giants and Jets. Here is where the Browns won’t get into the playoffs. It’s a do-or-die game against Pittsburgh, where I have them losing at home. Like I said before, I like the Browns. I think they have the potential to make the postseason, but as of right now, I see them finishing 8-8 on the outside of the playoffs looking in. 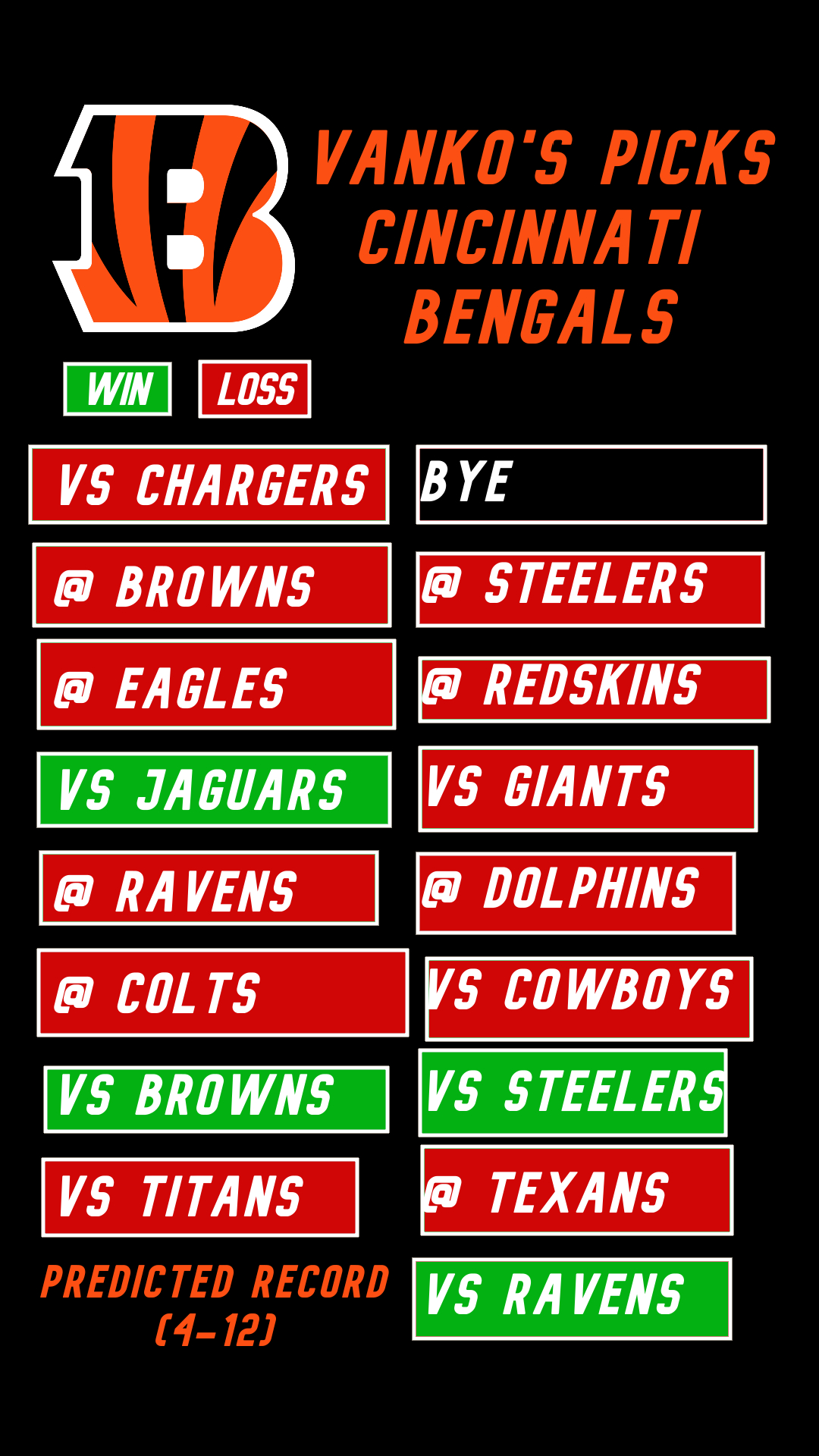 For teams like the Bengals, I think it’s best to highlight the wins rather than the losses. Their 1st win is going to come against Jacksonville and will likely be called the “Tank Bowl”. Their 2nd win is going to be a surprise win over Cleveland. It’s a great opportunity for Joe Burrow to show off his skills at home and that he is the franchise quarterback. Heading into the bye, I have the Bengals at 2-6. After their bye, it doesn’t get much better as I have them losing five in a row.

Another surprise win will come where they beat the Steelers at home. This win by the Bengals will keep the playoff race tight and to a close finish in Week 17. To finish off the season, they will beat the Ravens, who will be resting their starters to prepare for the postseason. Do I think Joe Burrow is the answer? Yes, but it will take at least a couple of years for the Bengals to get back into playoff contention. For now, they will continue the rebuilding process to be a playoff team in the future.