Here is how I have the AFC South finishing:

If you read the previous standing projection, you know how this works. But if you’re new, I look at each team’s 17-week schedule and give my take on why I have them finishing the way I do. Now, let’s analyze each win and loss for the AFC South. 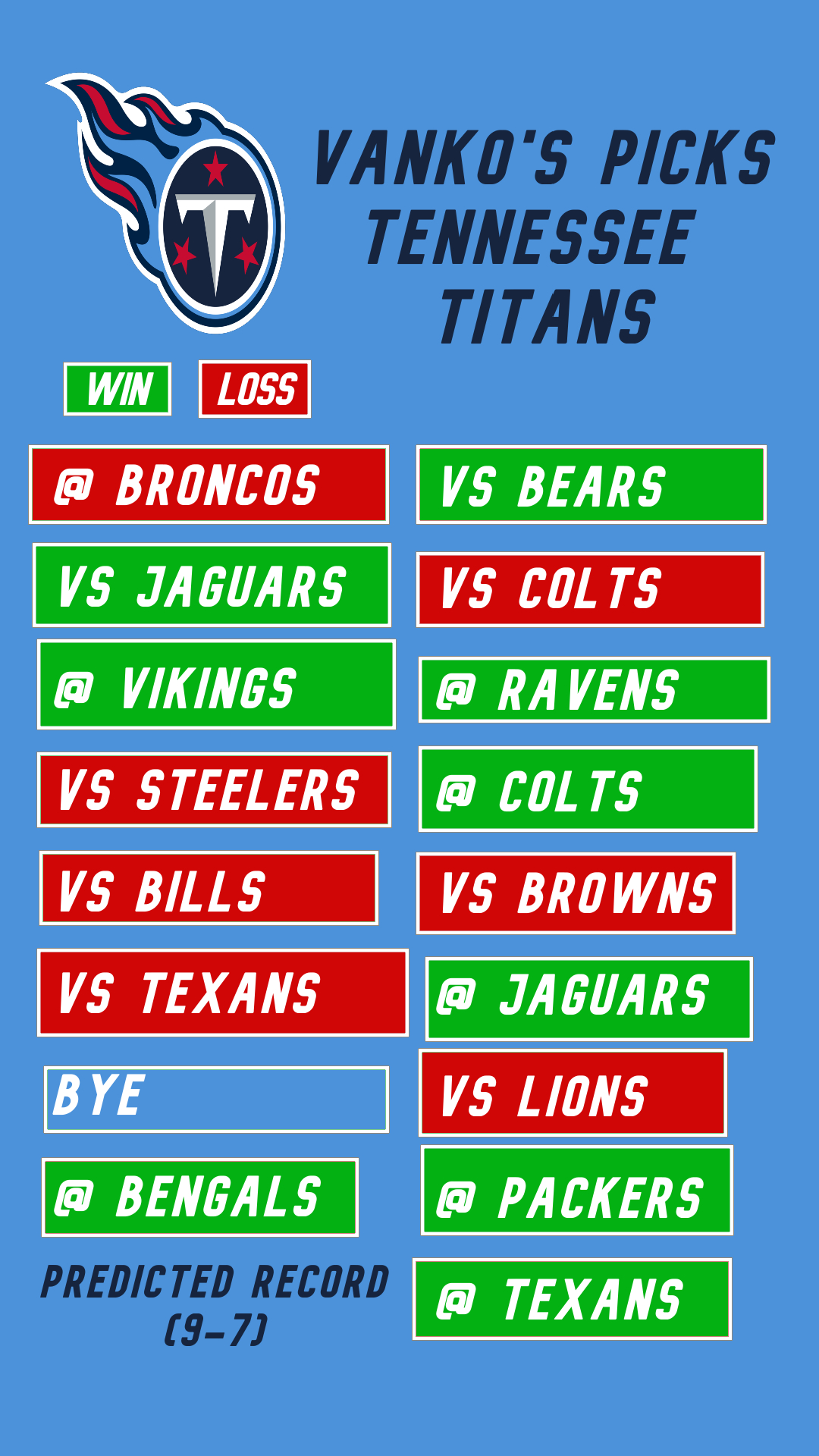 The Titans come into the season with high expectations from everyone. Ryan Tannehill finally emerged as a top quarterback in the late parts of the season and got paid for it in the offseason. Derrick Henry is an absolute beast that tears up the ground game with his dominant running, but I’m not buying into the hype. The Titans are still going to be a playoff team, but there are better overall teams than them in the AFC. Now, I have them going 9-7 and a strong 9-7 and I do believe they will be a playoff team, most likely as division winners or a top wild card team.

Weeks 1 to 6 are what I call “the test” for the Titans. I think these first 6 games will define whether or not they are what we saw last year. I have them going 2-4 before the bye. I think the Broncos are the more complete team out of the two. The Vikings game is going to be a good one, so I have the Titans stealing a game there. The Steelers, Bills, and Texans games are the final part of the test and I have them failing. I’m high on what Buffalo is capable of doing and with Ben Roethlisberger returning, the Steelers are also going to be a solid team. After the bye, that’s where I see business picking up again.

Similar to last year, I think they feed off a solid late push into the postseason. The Ravens’ game is going to be the most entertaining game to watch on their schedule because it’s a divisional rematch, and I have the Titans winning Round 2. Moving a couple weeks forward, they take on the Lions and this game is the Titans’ “upset loss” because every team has at least one of these. The Packers game is going to be the deciding factor as to whether or not they are the division winner and I gave them the win here because we still don’t know what Green Bay is going to look like just yet. 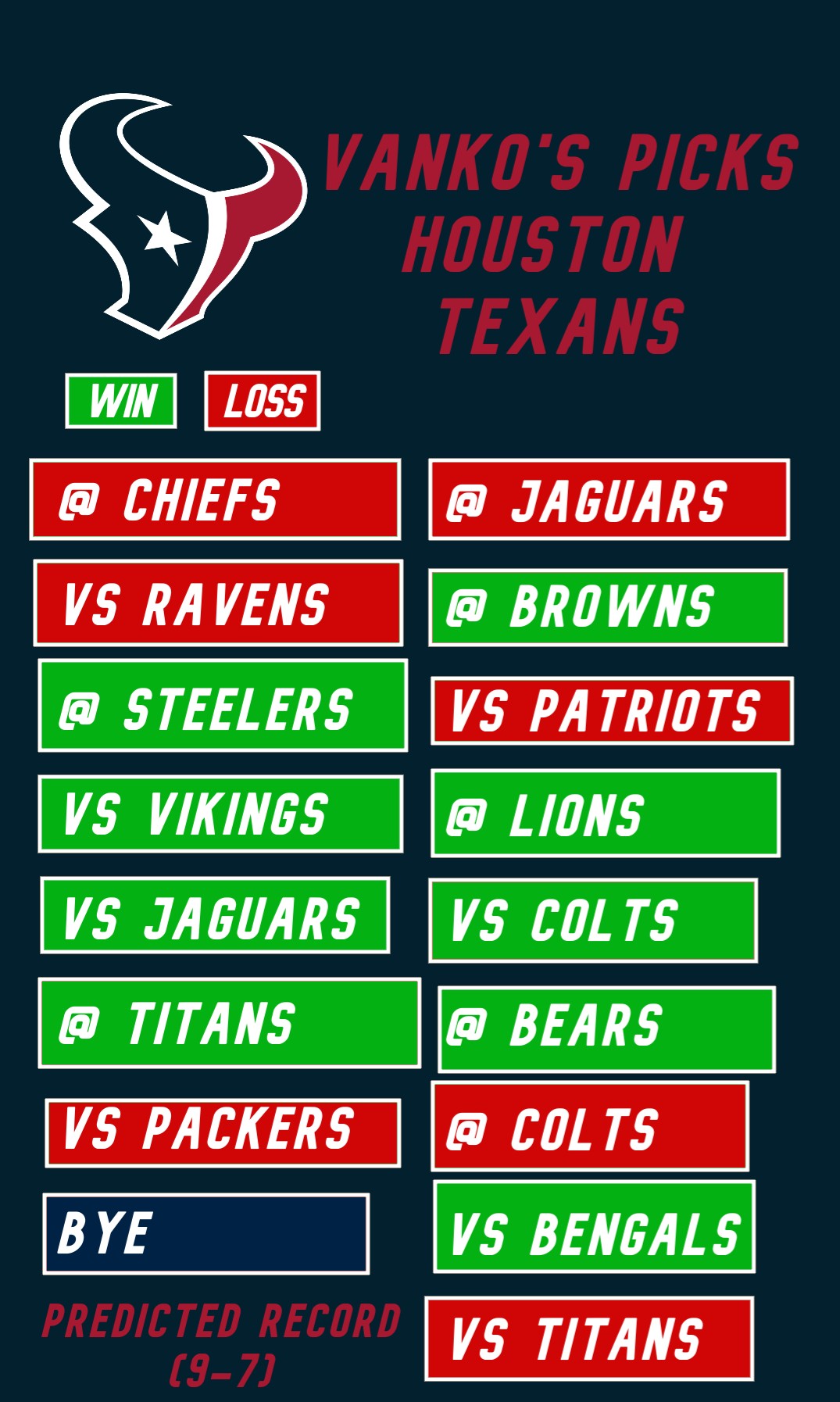 Are they a playoff team now? That’s the question we all want to be answered because DeAndre Hopkins was shipped away in a head-scratching trade. I like what Deshaun Watson brings to the table a lot, but the Hopkins trade left him without a top receiver. They did bring in Brandin Cooks, but he’s no Hopkins. The Texans open up the season with two extremely difficult games, both of which I give them losses. The schedule then gets easier, as I have them winning four in a row and then a loss to the Packers right before the bye. Again, the Packers’ loss is barring what Green Bay is going to look like (Love or Rodgers).

So, heading into the bye, the Texans are now 4-3. Their “upset loss” is going to be against the Jaguars, who look like they are going to be the worst team this year. After that, a loss to the Patriots succeeded by 3 straight wins over Detroit, Indianapolis, and Chicago. It’s at this point where the South becomes the most interesting division and is decided once again by one game. I have them losing to the Colts in Week 16.

At this point in the season, Indianapolis is going to be in contention still for the division title so it’s the “go big or go home” game for both teams. The Texans are 3-3 in the division and need some help from other teams to grab the title, but with my win for the Titans, they don’t get there. I still have them as a playoff team, but they won’t be as productive as they were last year. You can probably switch a loss to the Jaguars to a win to put Houston at 10-6 or maybe a switch with New England, but the moves Bill O’Brien made are still confusing and it’s why I’m keeping them as a low-end playoff team. 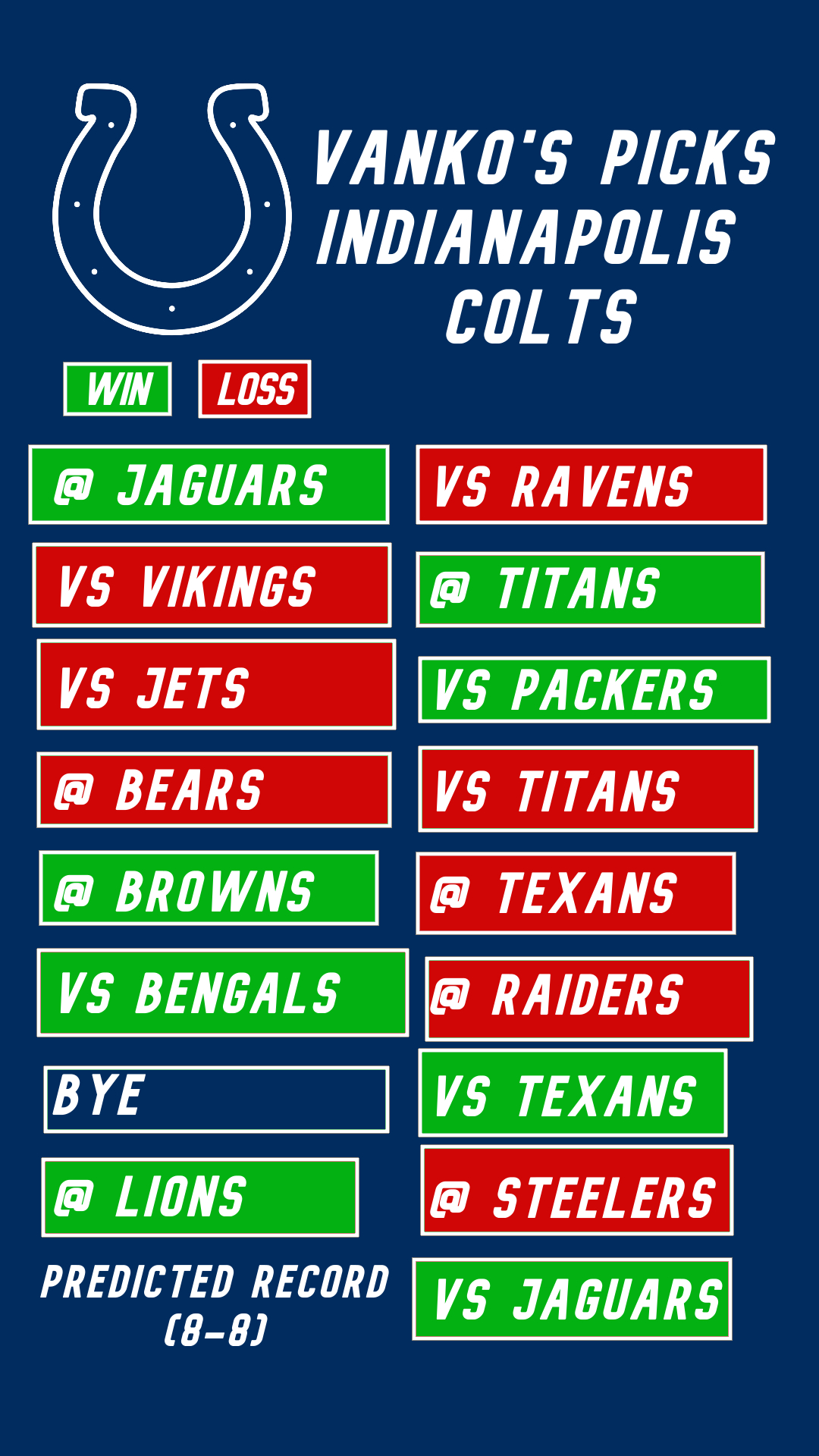 Like I said earlier, the South is always the division to be decided in either Week 16 or Week 17. That is not going to change this season. With the addition of Philip Rivers, I think that boosts their chances of making the postseason a lot. The only thing holding me back is the turnovers he produced last year. With or without the turnovers, the Colts are going to stay in the division race until the end.

They open the season with a win over Jacksonville and then go on a 3-game losing streak to the Vikings, Jets, and Bears. The games against Chicago and Gang Green can honestly go either way, but I gave the win to the Jets because I think the moment has finally arrived when Sam Darnold adjusts to his new offense. The Bears get the win because I predict Foles is going to win the starting job and I like Foles more than Trubisky. After those losses, there are 2 winnable games against the Browns and Bengals. So at the bye, I have Indy at 3-3. It’s not bad, because they are still legitimate division winners.

After the bye, the Colts travel to Detroit for a winnable game and then hit rock bottom against the Ravens. The first game against the Titans is important because I think this game can change the way the division looks. I have them getting the big road win over the Titans to stop them from running away with the title. Another big win is going to come from Green Bay because I’m not that high on the Packers (if that wasn’t clear). So the path looks clear for the Colts to make the playoffs by now, right? Wrong. I have them losing three games in a row once again.

The Titans are going to get revenge for the earlier loss, the Texans are going to be desperate for a win, and so are the Raiders. The division is still up for grabs at this point and it’s a huge Week 16 game against the Texans. I like Watson more than I like Rivers and in a game that could come down to the final seconds, but I give the win to the Colts. It’s a pivotal matchup at home and every game counts and I like the Colts to muscle out a win. The Steelers are going to ruin that party though because they are going to be looking for a higher wild card spot, so the Colts finish 8-8. 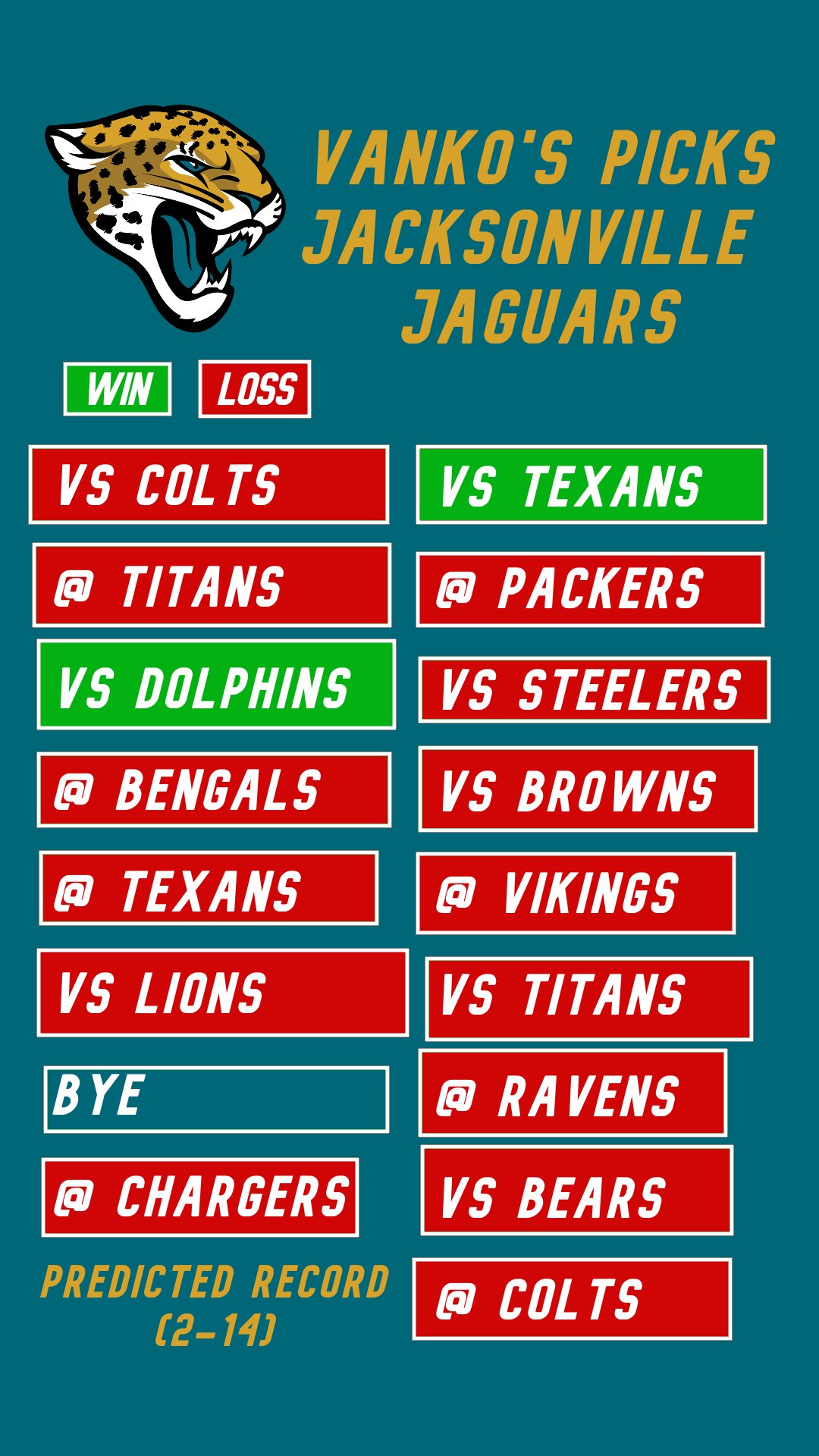 As you can tell by the graphic, I have the Jaguars losing a lot of games. Why? I believe they are going to be tanking this year. I don’t think there is much analysis needed here, but I’ll give some anyway. Their 2 wins are going to be against Miami and Houston. You can argue that they can beat Cincinnati and possibly the Lions, but I like both of those teams a little more than the Jaguars. They really never recovered after their upsetting AFC Championship loss to the Patriots a couple of years ago and rebuilding is the best route.

They’re going to be led by Gardner Minshew, who is going to have a good season, but as a whole, the team does not look good. So you’re probably wondering why I have them winning over Houston. Well, after a rough start that won’t get better, the Jaguars are going to be playing for pride the rest of the way. It’s also a division rival who is most likely going to end up in the playoffs, so why not spoil the party a little? The win also keeps the race tighter than it already is. Of course, my opinion is going to change about the Jaguars once camps and preseason are over and actual football begins, but this is the way I see things right now.