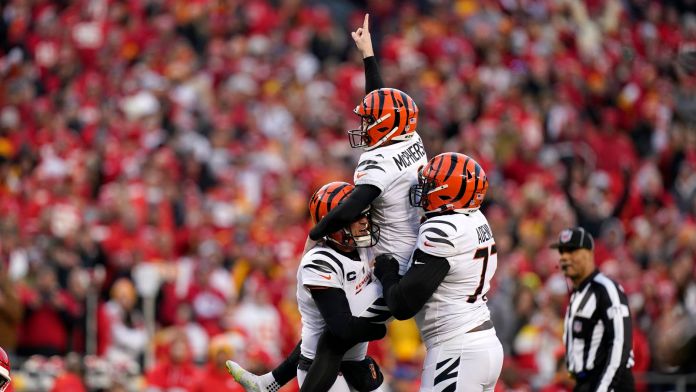 The 2022 NFL Playoffs have been an interesting ride, to say the least. Several game-winning field goals, underdog wins, and even a few nail-biting overtime games. But there is one man that has rocked the NFL world more than any other player in the postseason. Rookie kicker Evan McPherson has led the Bengals to two wins this season from last-minute field goals, one of which was in overtime.

Here’s a little about the coolest man in Cincinnati.

In Round 5 with the 149th pick in the 2021 NFL Draft, the Cincinnati Bengals shockingly took McPherson out of Florida. In college, Evan had a career completion percentage of 85% making 51 out of 60 attempts. Although these are great stats, some might argue that taking a kicker that early in the draft would be a waste of a draft pick. However, based on his production in Cincinnati, I am sure that many people would agree when I say that Evan McPherson was certainly not a reach.

During his first year as a Bengal, McPherson was 28 for 33 with a career-long of 58 yards. The post-season is where he really shined and proved himself to be an eventual elite kicker. In the matchups between the Raiders, Titans, and Chiefs, he went a combined 12/12 with a game-winner over the Titans and an overtime game-winner over the Chiefs to send his team to the Super Bowl.

Due to McPherson’s successful campaign as a rookie kicker, it has led some fans to believe that more teams should go after a solid kicker a little bit earlier in the draft. If it was up to me, forget the late-round running back that is just going to end up getting cut after spending two seasons on the practice squad and go get your team an electric kicker like “Money Mac.”