The Falcons are not in great shape as the 2020 season creeps ever closer. It may be played without fans, pushed back, or even canceled completely, but none of those alternatives will fix all the holes in the Falcons roster. After only holding only six picks in this draft, I can’t say the Falcons did much to fill some of their missing parts, at least for this coming season.

The Falcons made a few splashes in free agency with the addition of DE Dante Fowler Jr., who’s coming off an 11.5 sack season, as well as former OPOY Todd Gurley. While these signings will certainly add more star power to their roster, it won’t make up for all that they lost, the most notable of these departures being Pro Bowl TE Austin Hooper, starting edge rushers Vic Beasley and Adrian Clayborn, and their #1 corner in Desmond Trufant.

With Matt Ryan nearing the end of his illustrious career, it seems like the Falcons are going in the wrong direction after this mediocre draft performance.

A.J. Terrell was not worthy of a top-20 pick in this draft. PFF graded Terrell behind second-round corners like Jaylon Johnson and Kristian Fulton, and rightfully so. He just cannot guard receivers with pro-level skill or strength/size. Ja’Marr Chase torched him in the National Championship game for 137 yards and two touchdowns. Even Dyami Brown, a receiver for UNC, beat Terrell easily for a 40-yard touchdown last season. Nothing against Brown, who was UNC’s best receiver last season, but any top-20 pick should be shutting down sophomore receivers at UNC with ease.

Terrell has all the tools to succeed as an NFL corner: great speed, ideal build, and adequate strength are all on his side. However, he just fails to show up consistently in coverage. He does poorly on jump balls, he is sloppy coming back to the ball, and he loses receivers while reading the quarterback in man and zone coverage.

After having the 25th ranked pass defense in the league last season, according to Football Outsiders, and losing their top corner to free agency, the Falcons were smart to address their need at corner early in the draft. That being said, they should have taken someone more pro-ready at a position of need, such as CB Jeff Gladney or even DE K’Lavon Chaisson. Terrell has a long way to go before he should be awarded a starting spot on an NFL roster, but the Falcons don’t have many other options. So, expect to see Terrell put to the test early next season as the Falcons’ new #1. 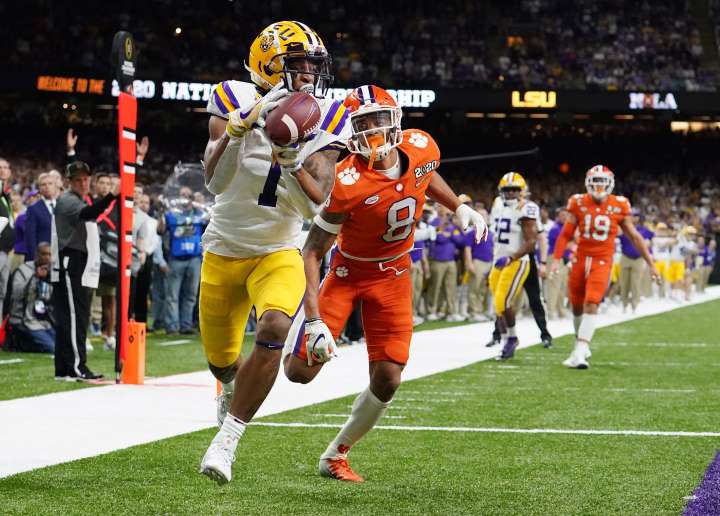 Marlon Davidson was very efficient alongside Derrick Brown on Auburn’s defensive line, but he doesn’t seem like an ideal fit for the Falcons’ base defense. The Falcons are in desperate need of an edge rusher to play opposite Dante Fowler Jr, so it seems odd they would want Davidson because I always imagined him as an interior lineman at the next level.

Davidson is quick for a 300-pounder, but he doesn’t have the speed or body type to play off the edge in the NFL. He just doesn’t have the combination of speed, strength, and pass rush moves to beat NFL tackles. However, I think he would be great on the interior because he can beat guards and centers with his vicious hands and quickness off the snap.

The Falcons plan to line up Davidson on both the inside and outside next season, which isn’t a bad idea at all. However, given their need for a true edge rusher, I feel that AJ Epenesa or Julian Okwara would have been a better fit here. Again, I like the position, but the selection seems like a missed opportunity.

Learning behind 6-time pro bowler Alex Mack could be a blessing for Hennessy. Mack’s contract is up after this season, and it’s clear Hennessy will be next in line. He is an undersized center who uses technical prowess to make up for his smaller build.

Hennessy excelled at Temple after transitioning from tackle to center in his freshman year. He racked up some awards as well, such as Associated Press All-American, first-team All-American Athletic Conference, and finalist for the Remington Trophy as the nation’s best pivot in 2019. He is a good player with a relatively low ceiling due to his frame.

He could be a solid starter for the Falcons after Mack is gone, but they don’t have the luxury to be patient. Matt Ryan and Julio Jones are both nearing the age of decline for their positions, and Todd Gurley isn’t durable enough to last into his 30s, so this team needs to think about winning now. So, if Hennessy is given the keys to the castle next season, he better be ready to fill the gigantic shoes that Mack will leave behind.

The Falcons reached on Mykal Walker, who wasn’t projected to go until the 6th round. If they really wanted him, they could have traded back and taken him in round 5 or 6, but curiously, they decided that he was worth a 4th-rounder.

Walker’s production at Fresno State was undeniable. 182 tackles, 22.5 tackles for loss, and 6.5 sacks in just two years is a phenomenal stat line. However, he played at Fresno State. If he had done that in the SEC, Big 10, or even Pac-12 that would be one thing, but Walker’s tape just doesn’t show a 4th-round talent.

He plays with little physicality, poor decisiveness in the run game, and almost all of his movements seem stiff and delayed. Walker has upside on special teams but has very poor value as a pure linebacker in the fourth round. The Falcons should have addressed their need at linebacker earlier in this draft instead of waiting until the fourth and then reaching for Walker. 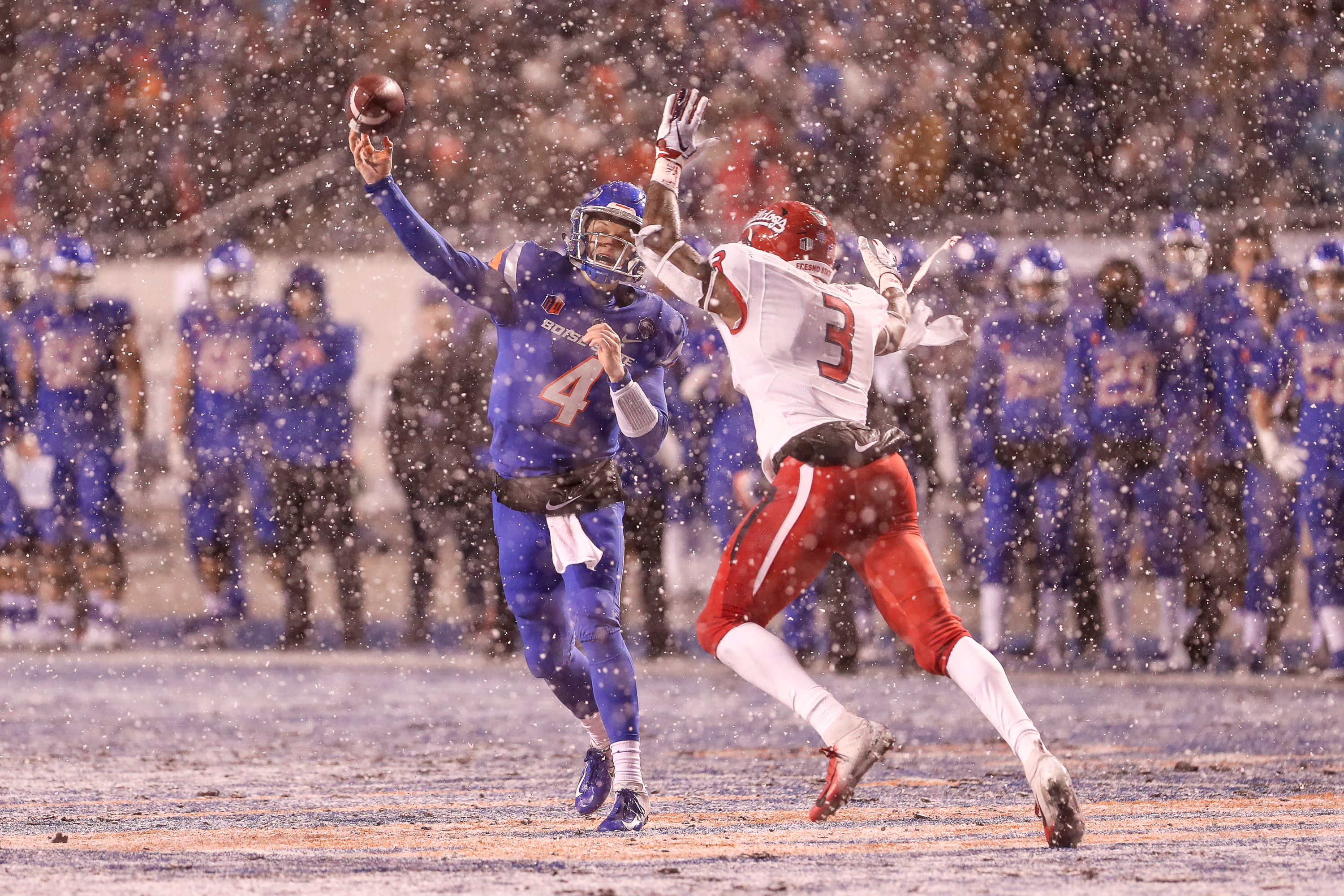 Jaylinn Hawkins’ six interceptions in 2018 caught the eyes of NFL scouts and put him on draft boards early. However, he didn’t follow suit in 2019, and his tape doesn’t lie; the Falcons may have reached a bit on this pick.

Hawkins has the build and discipline to play over the top, but his poor speed and athleticism could discourage teams from playing him there, which leads me to believe that he will be playing primarily in the box. However, he wasn’t good in run support at Cal. He can lay on big hits for sure but his gap reads and open-field tackling are sub-par at best. He will have to prove his worth on special teams in order to earn a roster spot.

I mean, he’s a punter. The Falcons only had six picks in this draft and they used one on a punter. Hofrichter was one of two punters taken in this draft, and you’ve got to believe he wasn’t going to get drafted if the Falcons didn’t take him. They could have picked him or one of the other five undrafted punters up after the draft if they really wanted to. It’s true that they needed to upgrade this position after ranking 30th in net punting average last season, but I don’t think he was worth a draft pick. 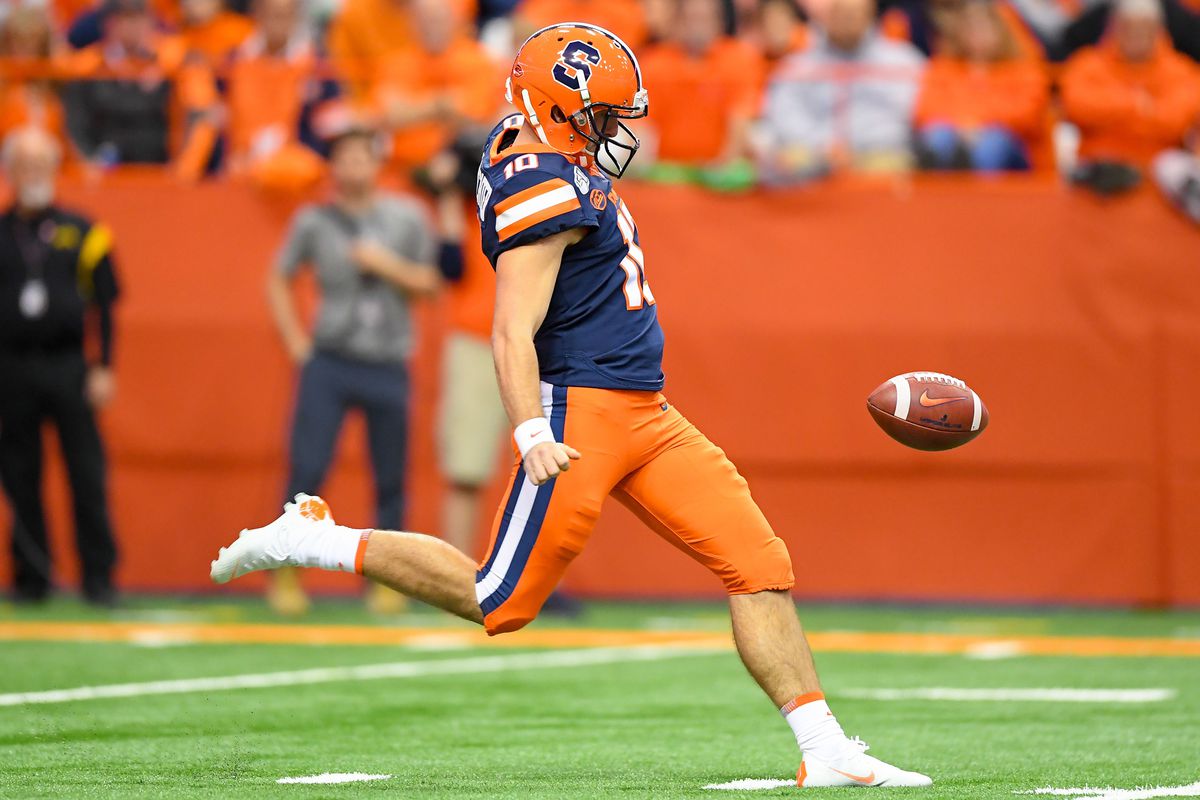 The Falcons had one of the top offenses in the league last season and they still finished 7-9. So, I like that they targeted defense early in this draft, but the players they chose were not ideal. The Falcons reached on just about every pick, so even though they did address many of their team needs, their draft could have gone so much better. If the Falcons had waited to take Kristian Fulton or Jaylon Johnson in round 2 and grabbed K’Lavon Chaisson in the first, they could have gotten much better value out of their first two picks.

The Falcons clearly had a well-thought-out plan coming into this draft that would take care of their immediate defensive needs and eventual offensive line needs. Unfortunately, their execution was poor due to reaching on four of their six picks and Davidson’s inability to play on the outside of the line.