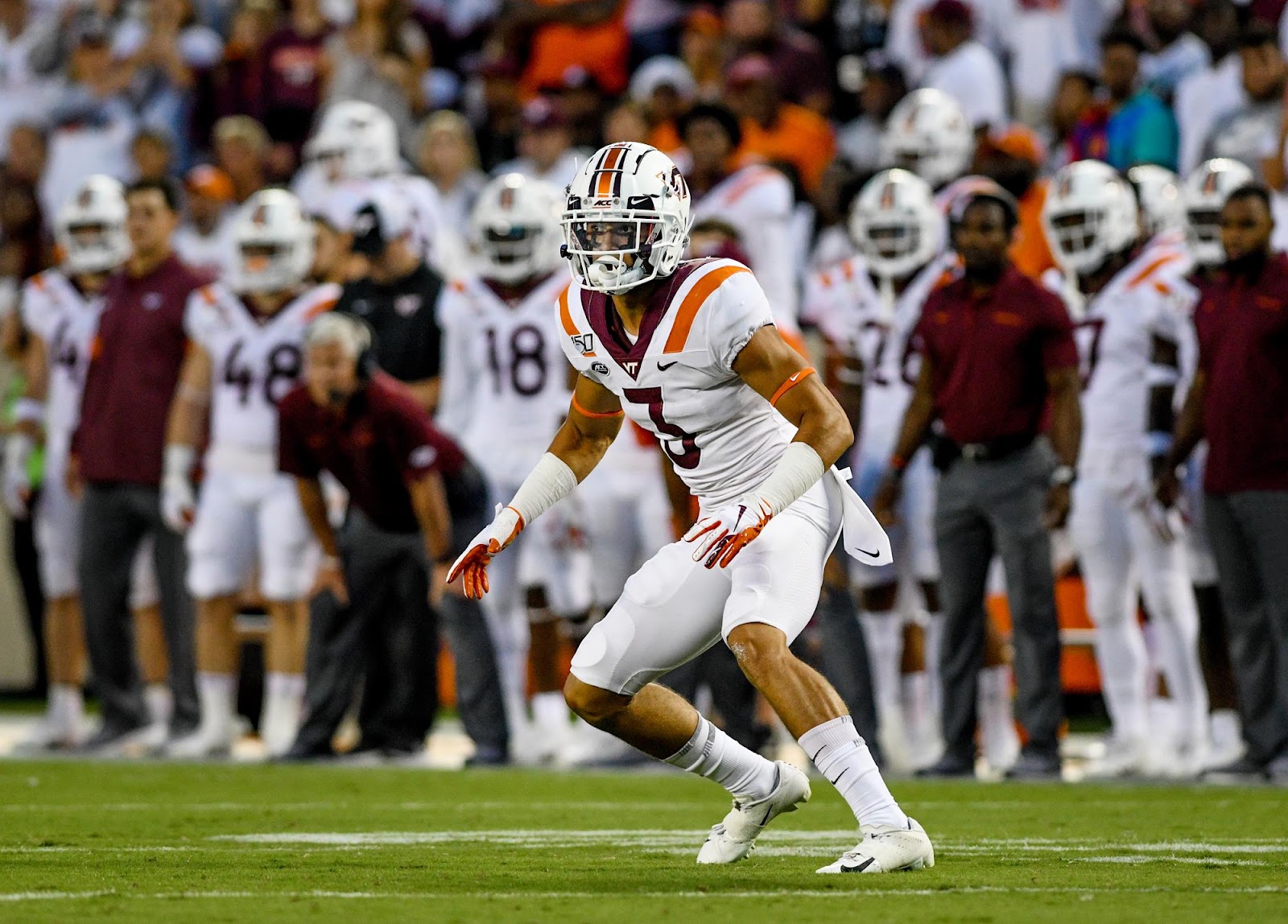 It’s widely known that the first cornerback taken in the 2021 NFL draft class will probably be either Caleb Farley or Patrick Surtain II, and while the case can be made for both cornerbacks, Farley still seems to stand out. His combination of size and speed is eye-popping, and put that together with his abilities in man coverage and you’re looking at a player with the potential to be a star cornerback in this league.

1.There’s no doubt that Farley is at his best when he is in press-man coverage. He is excellent at jamming receivers immediately after the ball is snapped, causing a disruption in the quarterback’s timing, essentially taking his receiver out of the play. Farley’s 2019 stats (he opted out of the 2020 season) can exemplify his ability in coverage for the most part, in the 2019 season Farley was targeted 50 times and allowed only 18 catches for 257 yards.

2. On the rare occasion that Farley is caught out of position on a route, he uses his speed well and usually is able to recover nicely. This gives him a lot more leeway when he mistimes his break on the ball, allowing him to reposition himself to make a play. Farley also is able to showcase his speed when he is in off coverage and his receiver runs a short route. Usually, a short route is an easy way to gain yards if a cornerback is playing off, but not with Farley. There were multiple times when Farley was lined up 5 maybe even 10 yards away from his receiver, and he would still be making plays on short outs or slants, which is a very rare sight when lined up that far away from the receiver. In general, Caleb is very good in almost any type of man coverage. In the press, he is able to move you backward knocking the receiver off of their route, and when he is playing off he is still able to make plays on underneath routes because of his athleticism.

3. Another thing that Farley does very well is diagnosing the run. Once he recognizes that there is a handoff he plays very aggressively and does well shedding blocks made by receivers, allowing him to turn a lot of outside run plays into a loss of yardage.

1. While Farley has a great skill set, he does have a couple of bad habits that we need to analyze as well. One of the only big problems with Farley is that there are times when he fails to turn to the ball, causing penalties and sometimes making him vulnerable to double moves. There are multiple plays where the ball is in the air, and instead of turning to find the ball, Farley keeps playing the receiver. Even when he does turn his eyes to the ball it is usually much too late and it causes him to lose the receiver. Now, this is a pretty big problem because a good receiver will usually recognize this and draw a penalty by creating contact when going for the ball. This will happen a lot if Farley doesn’t begin to look back for the ball especially at the next level where receivers can recognize and exploit this flaw in an instant.

2. Another thing Farley will definitely need to work on in the NFL is recognizing routes more. This is especially important because failing to look back for the ball may stem from this issue, and in the NFL recognizing routes is extremely important. Usually Farley won’t be able to recognize a route until it’s way too late which limits his ability to make a play on a pass or read a quarterback’s eyes. Not a permanent issue, but it’s definitely something that NFL teams will want him to work on.

In conclusion, there’s definitely a reason Caleb Farley is ranked as the number one cornerback on many draft boards. His size and speed set him apart, but his unmatched prowess in man coverage and just all-around talent give him some of the highest potential in this class. We’ll see soon enough whether or not he will end up being the first corner taken in this class, but regardless there is no doubt that he will have a very special NFL career.

Previous articlePitchers Who Need to Bounce Back in 2021
Next article2014 NFL Draft Superlatives: Taking a Look Back at one of the Most Volatile Drafts in Recent Memory