With the team having already declined his fifth-year option, 2022 is a make-or-break season for New York Giants’ quarterback, Daniel Jones. The former Duke Blue Devil won the hearts of Big Blue Nation in his rookie year when he showed flashes of high-level football; however, his struggles since then have caused the fanbase’s faith in him to begin to falter. 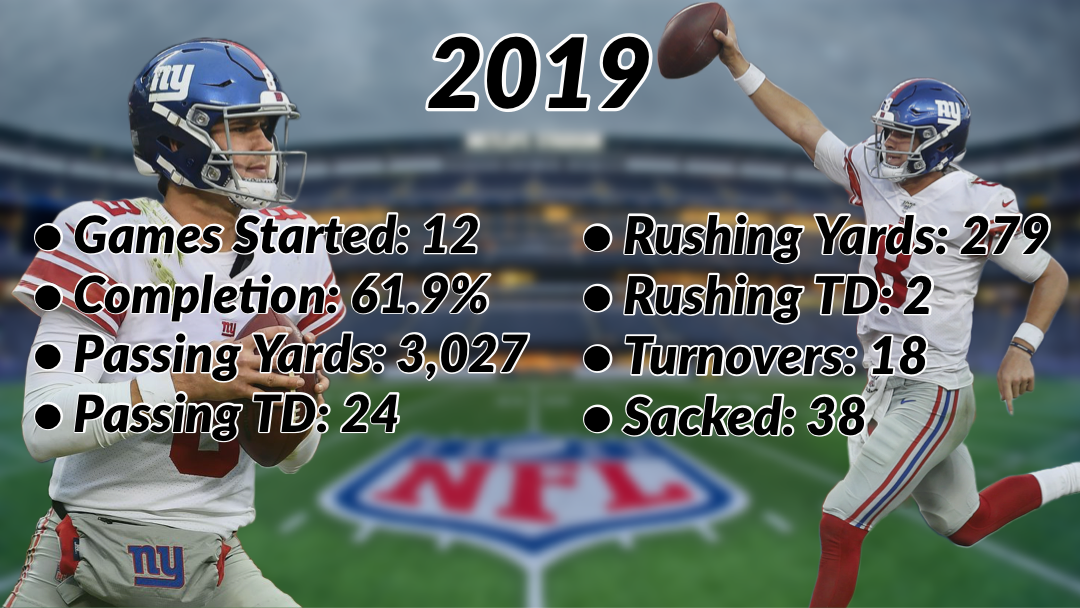 Daniel Jones got the call to start in Week 3 vs the Tampa Bay Buccaneers and started his career off with a bang. Jones dug the Giants out of an 18-point halftime deficit and ran in the game-winning score on a seven-yard scamper up the middle. He finished the game completing 23 of 36 passes for 336 yards and 2 touchdowns while adding 28 yards and 2 touchdowns on the ground.

Jones continued his success throughout the year, setting both team and league records for rookie quarterbacks: 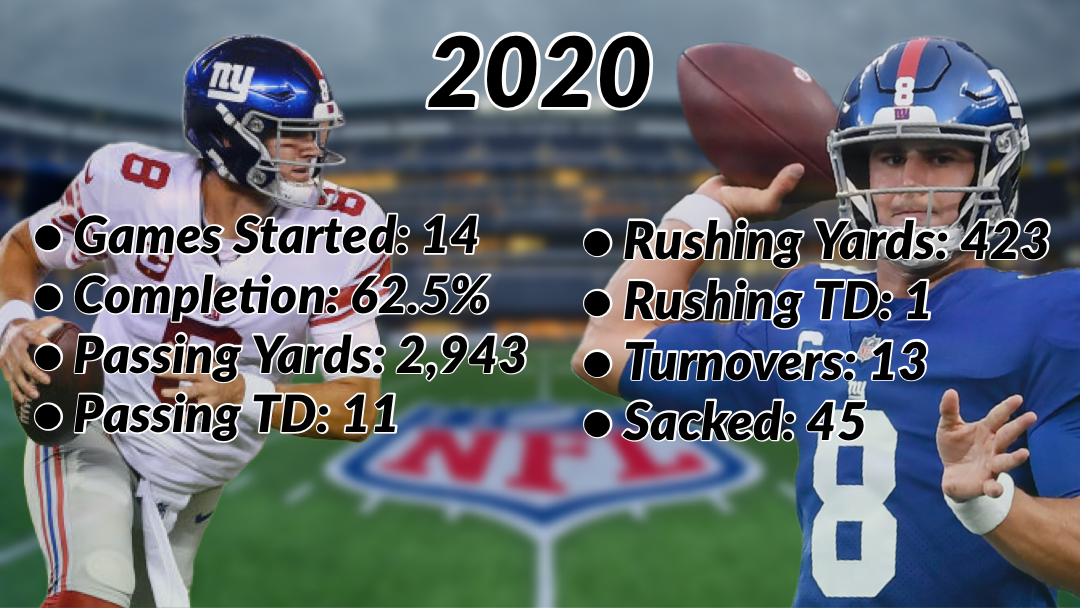 A monumental element of a young quarterback’s development is the consistency around them; Daniel Jones had none of that in his second season as a pro. After the 2019 season, offensive-minded head coach Pat Shurmur was fired in favor of Bill Belichick’s disciple, Joe Judge. With a new head coach comes a new staff, and the most important member of that staff for Jones was new offensive coordinator, Jason Garrett.

Garrett’s offensive scheme, in conjunction with the 31st ranked offensive line in the league, proved to be an ineffective combination for Daniel Jones as he threw for fewer yards and touchdowns while playing in two more games than he did in his rookie season.

Though the second-year QB and the offense had their struggles, Jones was the #1 rated deep passer in the NFL in 2020. He had a passer rating of 134.3 on throws of 20+ air yards, completing 19 of 39 attempts for 636 yards, 5 touchdowns, and zero interceptions.

He also excelled in the ground game, setting the Giants’ all-time QB rushing record with 423 yards. Along with that, Jones joined Lamar Jackson and Kyler Murray as the only three quarterbacks in 2020 to rush for at least 45 yards in 5 different games. 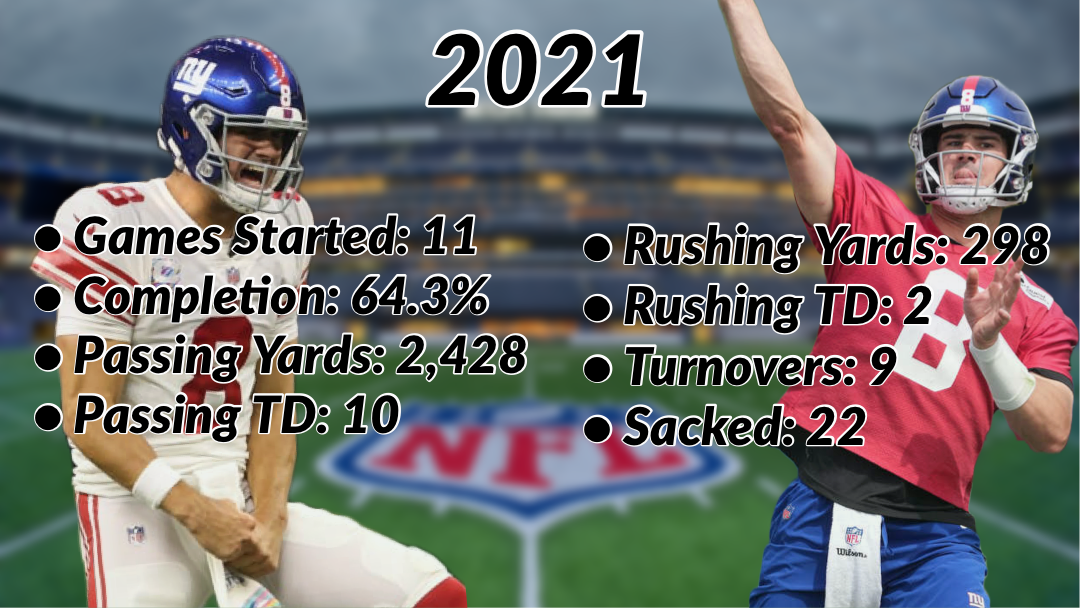 Fans expected Daniel Jones and the offense to take off in 2021. With the return of star running back Saquon Barkley and the acquisitions of Kenny Golladay, Kadarius Toney, Kyle Rudolph, and John Ross III it truly seemed like that would be the case. Unfortunately, this group hardly played together as the Giants were the most injured team in the NFL in 2021.

One of the few bright spots of the season occurred in Week 4. Jones threw for 402 yards and 2 touchdowns in an overtime victory vs the New Orleans Saints. This happened to be the only game of the season that Daniel Jones, Saquon Barkley, Kenny Golladay, Kadarius Toney, and Evan Engram all played at the same time. The performance drew fans back into the Daniel Jones hype train of 2019, as it went to show that when Jones has playmakers around him, he can produce at a high level and win games.

The rest of the year entailed more of what Giants fans have become accustomed to over the past few years. The offensive line continued to struggle, ranking 30th in the league according to Pro Football Focus, and Jones only played 11 games before his season was cut short due to a neck injury.

Without question, Daniel Jones has been dealt a bad hand to begin his career. So evidently that Giants’ Owner John Mara publicly admitted the organization has, “…done everything possible to screw this kid up since he’s been here.” Jones has endured the results of bottom-of-the-barrel offensive line play, inconsistent availability of his playmakers, and a revolving door of coaching staffs; leaving him with no opportunity to build chemistry with those around him.

This offseason has been all about putting the necessary pieces around Jones to give him a chance to prove he can be the franchise quarterback that the Giants hoped he would be after drafting him 6th overall in the 2019 NFL Draft.

Goal number one of the offseason? Bring in quality offensive linemen. Check. In free agency, the team brought in Mark Glowinski, Jon Feliciano, and Max Garcia to compete for starting roles on the interior offensive line. In the draft, the Giants continued to add to their linemen haul with top offensive tackle prospect, Evan Neal; versatile guard, Joshua Ezeudu in the third round; and dominant run blocker, Marcus McKethan in the sixth round. This group, along with talented tackle, Andrew Thomas, should allow Daniel Jones to stay upright and push the ball down the field.

Daboll takes over as the head coach of the New York Football Giants after playing a key role in the development of quarterback, Josh Allen. In 2021, the Bills’ offense was one of the most explosive groups in the league, ranking 3rd in total points and 5th in total yards.

Taking over at the offensive coordinator position is former NFL quarterback and Kansas City Chiefs’ quarterbacks coach, Mike Kafka. Kafka is seen as one of the best young offensive minds in football and has had the opportunity to learn under future Hall of Fame head coach Andy Reid for the past five seasons. The Chiefs offense finished the 2021 season ranked 4th in total points and 3rd in total yards.

The Giants organization is hoping that the combination of these two coaches can bring explosiveness to an offense that was ranked 31st in points and yards last season. But, most of all, the organization is hoping that these two offensive minds can develop Daniel Jones into a quarterback that is viewed as one of the best in the NFL. After all, that is what they did with their former teams’ signal-callers.

The Giants successfully improved the offensive line, added more weapons, and hired a proven offensive coaching staff during the offseason. With all factors taken into account, Daniel Jones has no more excuses.

So is this the year everything comes together for Jones? The signs point to yes.