Aidan Hutchinson is a monster. Enough said. None of the 2022 NFL draft prospects have risen higher than Hutchinson’s over the past three weeks. If you looked up Aidan Hutchinson’s name on Google right now, countless articles show up about whether the Lions should take him or Kayvon Thibodeaux with the first pick. It is insane how far he has skyrocketed. However, he deserves all of the attention. With six sacks over the last three games, including three over Ohio St., he dominates the collegiate landscape. Due to injury and lack of playing time, most of this big-time production has been regulated to this season. I can not see anybody at Michigan complaining, though. As Michigan prepares for Iowa this weekend, we will look at Adam Hutchinson and what the film indeed shows.

You can see other scouting reports and mock drafts by the Sports Wave here. 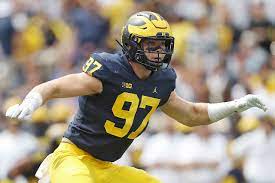 Despite the considerable amount of double-teams and chips, Aidan Hutchinson has shown a tremendous amount of power and quickness. For starters, his rip-move already looks like a five-year all-pro. His natural ability to take on wimpy arm blocks and shed them is one of the best out of any draft prospect in the last ten years. Additionally, Hutchinson shows devastating quickness off the edge to regularly beat tackles and tight ends. Aidan Hutchinson is at his best when he has the time to demonstrate a pass rush move to displace his opponent decisively.

Furthermore, his hands are just as dangerous. Especially against unaware offensive linemen. I cannot overstate how impressive it is for a draft prospect to hold such dramatic weapons. His hands are literal acts of massive destruction, perpetuating violence against anybody who stands across from him. As we will see with the film review, Hutchinson uses his often and without notice; combined with his athleticism, he is a deadly force. Overall, no one can deny his ability to rush the passer to devastating lengths. However, Hutchinson still can improve in some areas.

Although he has improved mightily, Hutchinson can still improve his foot speed and short-term quickness. Additionally, he has had some troubles against the run. As we will see in the film, Hutchinson will often lock up with linemen and fail to engage the running back. He loves to slant and provide the edge against the run. However, as one scout put it, “when they run right at him, it’s alarming.” If Hutchinson can improve in those areas as a defensive end, he will undoubtedly lock his top-three selection status. 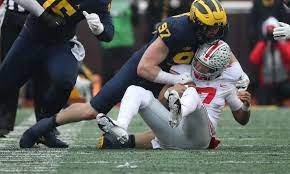 In the most-hyped game for Michigan, Aidan Hutchinson showed up huge for the Wolverines and played his heart out. The big plays showed up early as he produced a big sack, using his devastating rip move, in the red zone to force OSU to kick a field goal. However, during the early stages of the game, as seen in this play, Hutchinson fails to get set right away, leading to a big game. Plays like these are minor, showing that Hutchinson is the clear captain of the Wolverine defense.

Unfortunately for Hutchinson, he shows poor footwork on a WR screen and gets beat inside. He was showing his weakness of failing to break down and tackle. However, that was the last of Hutchinson’s inferior plays. From there, Hutchinson provided a plentiful amount of pressures and QB hurries. Including two more sacks. His final one was arguably Michigan’s biggest sack of the season, essentially ending OSU’s drive and their playoff chances. In conclusion, the most important thing to note is his hands’ quickness and violent nature throughout the entire game. The Ohio St. tackles could not keep up.

While Michigan’s game against Ohio St. was one of his best games, Hutchinson’s game against Michigan St. was one of his worst. He starts strong, providing a crucial pressure on third down to lead to an interception. However, he has some poor plays afterward. On this Kenneth Walker touchdown, Hutchinson fails to shed his block leading to Walker bouncing the ball into his gap and scoring an easy touchdown. On the very next play, Hutchinson over pursues Walker and gets beat to the outside. He is showing once again a failure to break down and tackle.

However, it is not all bad for Hutchinson as he sheds through a holding penalty and sacks Payton Thorne to stop a Michigan St. drive. During the first drive of the second half, again, Hutchinson causes a holding penalty backing Michigan St. to a 1st and 20. Unfortunately, he fails to make an impact after that, which ultimately leads to Michigan’s demise. The inability to shed blocks in the run game allowed Walker to run over Michigan play-after-play. Hutchinson needs to improve his ability to stop the run; otherwise, he will get killed in the NFL. 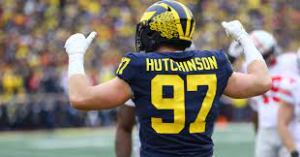