As we near the end of the 2021 College Football regular season, prospects for the 2022 NFL draft continue to vie for a chance at playing at the next level. Desmond Ridder is a firm player in that prospect pool. At Cincinnati, Desmond Ridder has led the Bearcats to a spectacular 40-5 record over the past four seasons. His stats are nothing to look over either. During his career, he has posted 8752 passing yards, 70 touchdowns, and 24 interceptions. Moreover, his 2020 campaign has been his best yet, compiling 1847 passing yards, 18 touchdowns, and only four interceptions. Needless to say, Desmond Ridder has produced significantly during his career as a collegiate athlete. However, many still question his ability to transition to the NFL. Thus, I looked over two crucial games from Ridder from this season to see his true potential.

You can see other scouting reports and mock drafts by the Sports Wave here.

Ridder can dominate any opponent with two specific and breathtaking skills. His arm strength and athleticism. Firstly, Ridder’s arm is one of the best not just at the college level but also in all levels combined. He generates excellent velocity in short route concepts, completes medium-level passes with tremendous zip, and throws the ball 70 yards on a dime. Nobody questions Ridder’s ability to launch the football.

Additionally, Ridder’s athleticism is nothing to scoff at either. Although he is not shifty enough to be compared to a Lamar Jackson or even Russell Wilson, his long strides nearly mimic Josh Allen’s style. Especially in the way he shows his toughness. Furthermore, his four-year starting experience at the collegiate level proves he is not a one-year wonder. Overall, he possesses the tools to become a great starting quarterback in the NFL.

While Ridder can impress anyone with a flashy deep pass, his accuracy continues to be a point of emphasis from his doubters. For a potential first-round prospect, there are way too many overthrows, underthrows, and uncatchable balls. According to PFF, his uncatchable pass rate is at a staggering 25%. For reference, Trey Lance had the worst of the 2020 QB class with 22.8%. Ridder lacks consistency when throwing downfield. Often he fails to set his feet properly or align his shoulders to his target, which leads to errant throws. Despite having tremendous athletic tools at his disposal, Ridder lacks accuracy that is pro-ready.

In Cincinnati’s first true test of the season, Desmond Ridder showed off why some have a first-round grade, while others place him in the fourth round. The first noticeable big play occurs early in the first quarter; on third and ten, Ridder throws a terrible pass off his back foot while nearly falling backward, which gets bounced around for an interception. Not a great start for the senior, but what’s even more important is how he responds.

The next four drives are not great either as Ridder throws inaccurate passes multiple times and one occasion, fails to feel the backside rush leading to a sack-fumble. However, fortunes changed after all-American linebacker Micah McFadden got ejected for targeting. Ridder zips a bullet to his tight end on a perfectly executed in-route, leading to Cincinnati’s first touchdown. From there, Ridder played great as he led his team to comeback and win. Ridder’s best throw of the day came on an excellent fade route to his big wide receiver, Alec Pierce. Ridder showed great poise in the pocket and delivered a perfect ball into his receiver’s hands. He could not have thrown it any better.

For Cincinnati, their biggest challenge of the season came against Fighting Irish the following week. Not only did Ridder need to play well to keep Cincinnati’s playoff hopes alive, but he also had to prove he could play against top competition. In a great game overall, Ridder did both as the Bearcats came away with a big win. Although he started slow with some stalled drives, Ridder came through with an excellent two-minute drill late in the first half. He then capped it off with an underthrown ball that Kyle Hamilton should’ve picked off but instead resulted in a Bearcats’ touchdown.

Despite the score, Ridder looked flustered and wildly inaccurate in the first half. However, he played better in the second half. On the opening drive, Ridder threw an excellent touch pass to his giant receiver for a big gain. However, Ridder lost a lousy fumble on a Notre Dame blitz on a play that he should’ve thrown the ball away. Despite his troubles during the game and the inaccuracy issues he showed again, Desmond Ridder came through in the clutch for Cincinnati. On a pivotal time-wasting drive late in the fourth quarter, Ridder took the Bearcats down the field and scored the game-sealing touchdown. Ridder’s best pass was on a second and ten perfectly-led bullet to his receiver over the middle. While he had an up-and-down day overall, Ridder came through big when his team needed him most. 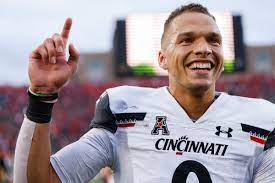