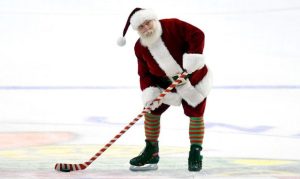 The Coyotes are going into the Holiday break with the league’s worst record.

Where are you Christmas – Faith Hill

The Canadians are stuck wishing they could relive last year.

A large Covid outbreak and the disappearance of Mat Barzal equals an unhappy time of the year.

The Senators may someday be good, they have shown so much potential with so many players this year.

Uko-Pekka Luukkonen is playing unbelievable, but he is all alone, well

Tage Thompson too, but that doesn’t help my point with the song name.

It seems the fast start was all but a fairytale for the Devils.

The Kraken is that toy you get and love for a while until it isn’t fun to play with anymore. The team is so boring to watch, and really just not good.

The underlying numbers for the Flyers could make a Flyers fan cry.

The Blue Jackets are riding Oliver Bjorkstrand’s hot streak, and continue to be over .500.

It’s Begining to look a lot like Christmas – Bing Crosby

It seems the Blackhawks will just not go away, they are still a very average team, but they can still score goals as long as Kane and Toews are on the team.

The Sharks may be the most average team in the League, they are battling the Stars for the leagues’ most boring team.

The Red Wings have seen better days and so have Thomas Greiss and Alex Nedeljkovic, safe to say it wasn’t a great weekend for the combo.

It’s not Christmas Without You – Kathrine McPhee

Paul Maurice resigned and things are changing in Winnipeg.

The Kings are going into the break just three points out of a playoff spot, the team is exceeding expectations and that is cause for a jolly tune.

The Bruins have had some really bad luck with Covid lately, kind of like everyone else I guess.

When it Christmas Time in Texas – George Strait

The Stars got an early Christmas present from Cam Talbot who gave them 6 fairly easy goals on Monday.

Christmas is the Saddest Day Of the Year – Jill Sobule

The Flames did not get a game in this week because of Covid, this has not been a good start to the Holiday season for the Flames. I feel bad, but I had to move up the Ducks, so the Flames are a victim and move down on this Week 10 Power Rankings.

Christmas Without You – Dolly Parton

The Oilers without a good defensive group seems like it just won’t compete well.

The Blues expected goals are not great, but they will continue to ride this possibly lucky streak as long as they can.

I Wish it Could Be Christmas Everyday – Wizzard

The Predators have been the hottest team in the league, something they hope can keep going even after the break. The Preds continue to move up this Week 10 Power Rankings.

Evan Rodrigues has been on a tear lately, helping the Penguins continue to rise in the rankings again.

The Covid bug bit the Panthers bad, playing short-handed until being shut down gave the Panthers some bad results as of late. They do have to move down on this Week 10 Power Rankings sadly.

The Ducks are a grand example of how to rebuild. The team deserves to be moved up on this week, Week 10 Power Rankings!

The Golden Knights got healthy and they became very good again.

After 8 straight wins, the Wild have lost four straight, not the place they want to be before the Winter Classic. The Wild did have some games postponed because other teams are having Covid issues, so the lack of games may have caused some cold legs, as well as some bad injury news of Jared Spurgeon going on IR.

I think I do believe in the Rangers, they have such a fun team to watch.

The Avalanche continue to score, but man they let up almost just as many goals.

Ovechkin update: 22 goals and 47 points in 26 games. The song title is was Ovechkin says every time the Caps are on the Power Play.

The Lighting was bound to end up in the top three on this power rankings.

Its the Most Wonderful Time of the Year – Andy Williams

Then Leaf’s goaltenders have become an issue lately, but they still are a top team on this Week 10 Power Rankings.

The Hurricanes are back to being dominant, they will go into break being the top team in the league again.

Check out my previous articles!