Ohio State WR, Jaxon Smith-Njigba burst onto the college football scene last season, amassing 1,595 yards and 9 TD’s, earning a 91.7 PFF grade. “JSN,” a former five-star out of Rockwall, Texas, will now have the opportunity to be Ohio State’s number one wide receiver, now that Garrett Wilson and Chris Olave are heading to the NFL.

JSN is an all-around very solid WR. He has a technically-sound release, shows off really good route running ability, can stop on a dime, boasting suddenness in his routes. JSN is able to get low in his breaks and flexes a high degree of body control throughout his routes. Additionally, he has a good understanding of, and he is able to win using leverage.

He possesses really reliable hands being able to catch through contact well. He can catch outside of his frame, and track the ball very nicely in the air.

His YAC (yards after catch) ability is exceptional; he’s extremely elusive after the catch. When JSN has the ball in his hands, bodies hit the floor; you won’t find many receivers take as many ankles from DB’s as Jaxon Smith-Njigba was able to take. He also is able to fight through tackles with physicality.

Arguably my favorite trait of JSN’s is his effort. He is a high-effort guy, he’s always playing hard. In blocking, he’s not only a willing blocker, he’s good. He can get into the DB’s chest and drive them downfield, he can anchor well, he is a legitimately good blocker. He doesn’t quit on routes; he’s very good at improvising and when he loses the rep, he keeps trying to break open. Along with that, when his QB is under duress, he works back to his QB to make it easier on him. That’s the stuff that doesn’t show up on a stat sheet. 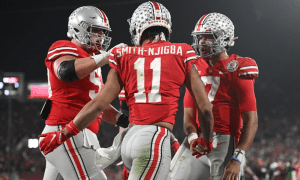 Going back to what the start of this report, JSN is all-around a very solid WR. Not too many negatives that could be jotted down. While he has solid burst, his long speed is a tad bit underwhelming. Thus far, OSU confined Smith-Njigba to the slot, with Garrett Wilson and Chris Olave playing on the outside, so we haven’t seen whether Smith-Njigba can survive on the outside. Along with not knowing how he’ll survive on the outside, we haven’t seen many reps vs press. The only other concern to be had with JSN is he catches with his body sometimes when it’s unnecessary. 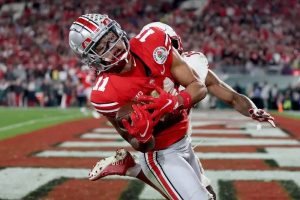 Jaxon Smith-Njigba is now set to be Ohio State’s WR1. With him taking on a bigger role, it’s fair to assume he’ll see more targets and see improvement. JSN is reminiscent of Jarvis Landry and I graded him as an early-mid 1st rounder. Compared to Garrett Wilson and Chris Olave, I believe JSN sits in between the two, being slightly worse of a prospect than Wilson and a better one than Olave.