Welcome back, faithful readers, to the last pit-stop on the road to the big show. It’s been a long, winding, and often surprising trail to get here but it was nothing if not entertaining. Who could’ve thought that the Philadelphia 76ers would roll over and die without so much as a win? That the Heat would bully the league-best Milwaukee Bucks into a 4-1 rout? That the defending champion Raptors would forget how to shoot altogether? We at The Sports Wave certainly didn’t, but we’re here for this one. Let’s get into it.

How Did We Get Here? 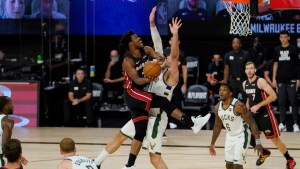 What a show the Miami Heat have put on in the Orlando bubble. They may have Jimmy Butler, sure, but the secret to their success against their first two opponents might not lie with him. Consistent 3-point percentages on a nightly basis from statistically the NBA’s best-shooting team meant that even when their starters are under-performing or riding the bench, they still have players getting into double figures. In their game 5 clinch over Milwaukee, their leading scorers (Butler and Dragic) held only 17 points apiece. A total of 6 players contributed 12+ points, with 2 of them coming off the bench, proving once again that basketball is a team game. They’ll need their wits about them and every bit of that bench to topple the Celtics. 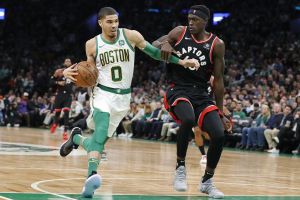 In round 2, Boston was 0.5 seconds away from going 3-0 and putting the Toronto Raptors on the ropes. One miraculous shot later, the Celtics began to feel the pressure. After two disastrous shooting nights and a lot of defense, the series was tied at 3-3. Going into game 7, it was any team’s game to win; so what happened? Kemba Walker was awful, with the Raptors due credit for switching to a Box-And-One defense to limit him. However, Boston’s abundance of playmakers and scorers, not to mention defensive stalwarts, won it for them in the end. By capitalizing on their forced turnovers and forcing efficient shooters open, the Celtics made Toronto pay on the back end. Marcus Smart, Jaylen Brown, and Jayson Tatum all broke out some of their best work in this series. Can they reach new heights in the ECF?

The Celtics and Heat met a total of 3 times this season, with Boston taking the first 2 matchups and Miami taking their only bubble meeting. They haven’t met in the postseason since 2012, where they made up the ECF again. LeBron James, Dwayne Wade, Chris Bosh, and friends bested the Celtics in 7 games then. Those days may be long gone, but these teams feel oddly reminiscent of those legendary squads. The red-hot Heat, fronted by an energetic playmaker with more heart than they know what to do with. The cold-blooded Celtics, filled with excellent role players and a rock-solid core of young talent and veterans. Who will come out on top? We can only hope for a series as exciting as that 2012 one. 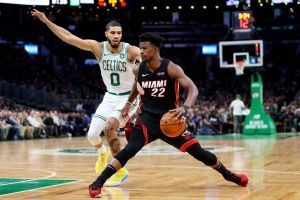 The Heat was excellent on defense (11th overall), underrated on offense (7th overall), and unbelievably efficient from the 3-point line (2nd-highest shooting percentage in the NBA). They’re also bigger but still managed to get to the free-throw line 4th-most in the league. So the question remains: What does Miami have to do to win this series? Despite boasting superior size, they rank 29th in offensive rebounding, which they’ll need to improve on in order to keep their offense efficient against a mighty Celtics defense. Their assist totals had them at 5th this season as well, and finding the open man on the perimeter has been crucial to their success so far. Focusing on getting offensive rebounds and redistributing the ball to their shot-makers could spell disaster for Boston in the long run. 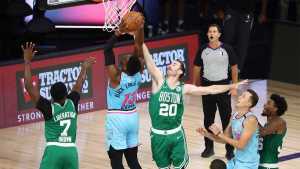 For the Celtics to take the series, they need to do one thing right; Find their shot. When they went on runs against the Raptors, it was because they buckled down, went back to the fundamentals, and hit the wide-open looks that Toronto’s defense allowed to focus on other aspects of their 4th-overall offense. Their defense, led by 1st-team all-defense G Marcus Smart, was destructive, holding one of the NBA’s premier 3-point shooting units to a miserable set of outings. They’ll need to repeat that performance against one of the best teams from distance in Miami. If they can continue to find boards on both ends of the court around the Heat’s bulky centre group, they’ll make short work for themselves. Combine all of this with the fact that they’re likely getting a real scorer and facilitator in Gordon Hayward back in time so, if he returns to form, Boston will have a shot at the title.