With another week in the books, another week of NFL overreactions comes too. It has been a great season with ups and downs. Additionally, primetime keeps delivering great games. The NFL continues its streak of phenomenal primetime games that keep even the most casual fans involved. In conclusion, the Sports Wave will continue to provide those overreactions, and you will not want to miss it. If you want to check out previous articles, you can here.

The Eagles are Better than their Record

The Eagles have been underdogs in every game this season. They are 2-4 with a minus-15 point differential. By just about every statistical measure, they are mediocre — not horrible, not good, but mediocre. The Eagles rank 18th in Football Outsiders’ DVOA metric. They rank 20th in TruMedia’s Expected Points Added (EPA) metric.

They’ve already played the two teams that competed in last year’s Super Bowl — the Kansas City Chiefs and Tampa Bay Buccaneers — along with the impressive 5-1 Dallas Cowboys. Per Football Outsiders, the Eagles’ remaining schedule is the third-easiest in the NFL. I think an assertion can be made that the Eagles will improve mightily over the final 11 weeks. While they are still a fringe playoff contender, they are doing much better than many predicted. 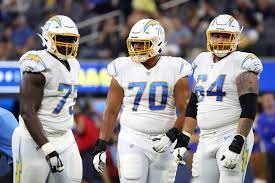 While an offensive lineman will never win a rookie of the year award — they are too statistics-driven — left tackle Rashawn Slater has made a real strong case for it. According to Pro Football Focus, Slater has allowed just two sacks on quarterback Justin Herbert in 266 pass-blocking snaps; both sacks came in Week 5 against star pass rusher Myles Garrett. The Chargers are ecstatic that their past two first-round picks set them up for tremendous success. Rashawn Slater is one of the key reasons for their improved success this year.

Penei Sewell is a Disappointment

Although we are only six games into the year, Penei Sewell has struggled mightily. His four sacks allowed are second only to the Raiders’ Alex Leatherwood among rookies, and his pressures allowed (23) are tied for second-most in the league overall. One potential reason for the slow start? A finger injury to left tackle Taylor Decker caused chaos on the Lions’ offensive line just days before the Week 1 opener. Sewell, who played left tackle at Oregon but was prepping to debut at right tackle in Detroit, instead flipped back to the left. His acclimation has been up-and-down ever since. However, according to PFF, Penei came back this week and had his best week yet.

The Cardinals are the best team in the NFC

Not too big of an overreaction, but the Cardinals have played fantastic this year. From start to finish, the Cardinals continue to play at an extremely high level. They rank first in the NFC in Total DVOA, second in offensive EPA, and first in defensive EPA. From an analytics standpoint, they are miles ahead of other teams in the conference. Additionally, they have played some tough opponents in the Titans, Browns, and Rams. Yet, they blew each team out. I think the Cardinals not only have playoff expectations but Super Bowl expectations for this season.

Previous articleIn Depth Standings, Playoff, and Award Predictions for the 2021-2022 NBA Season
Next articleWhat went wrong with the Chiefs Off-season