During last Saturday’s preseason game vs. the Cowboys, GM Tom Telesco stated that the team would carry 3 QBs on the roster. However, I feel Chase Daniel has proved himself as QB2 and despite the effort of Stick, he’s getting cut.

I disagree with GM Tom Telesco, who stated that they would keep 4 HBs on the roster; it’s important to know that rookie running back Isaiah Spiller suffered an ankle injury on Saturday. This causes Larry Roundtree just barely to make the roster.

FB Gabe Nabers hasn’t proved anything during the preseason while the 7th round rookie Horvath has proved his worth.

Joe Reed looks like a servicable backup returner, and WR1/2, as well as he’s been balling out in the preseason. Carter was signed this past offseason to be the team’s main returner. Standout WR this preseason Michael Bandy has proved to me that he deserves a spot. Second year WR Josh Palmer has shown out and looks to be the WR3 this year. Jalen Guyton despite being the teams best deep threat, I don’t believe he should make the 53 man.

Should the Chargers keep 3 Tight Ends, these 3 seem to be the most obvious ones. Hunter Kampmoyer had a shot but a fumble in week 3 of the preseason wrapped that discussion up.

Slater is a top 10 LT in the league, so no changes there. Linsley, and Feiler proved last year as great OL, and rookie OG Zion Johnson balled out despite what PFF said about him. Jamaree Salyer, Wlll Clapp and Brendan Jaimes look to backup the starting 5.

Fehoko balled out this preseason, as did Morgan Fox. Otito dominated the run, and standout Joe Gaziano with 4 QB hurries. First round pick in 2019, Jerry Tillery gets the boot despite having an upside at pass rushing, his run defesne is to put it bluntly, atrocious. Doesn’t help that he showed nothing during the preseason against backups either. 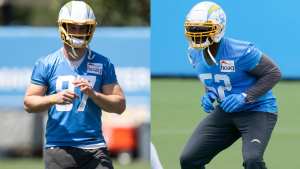 Jamal Davis provides the Chargers with a backup EDGE spot with 2nd year EDGE out of Duke Chris Rumph. Aside from that, he can also backup Kyle Van Noy if Staley chooses to use him (Van Noy) as a mix of inside linebacker and EDGE.

I’ll be honest this is the most confusing position, as it’s hard to say who should make it. Amen Ogbongbemiga should make it however in my eyes.

Goodbye Brandon Sebastian! The Chargers are going to keep 6 corners likely due to the injury of JC Jackson. Other than that this is a good CB room.

The hope is that newly resigned safety Derwin James keeps it up, and Mark Webb shows out. Nasir Adderly has shown out in camp this offseason and has easily won the free safety job at least for now. JT Woods who I personally had high hopes for, did not do well this preseason as he had a ton of missed tackles.

These guys were always making the roster. No need to explain.