Ranking the 8 NFL Divisions From Easiest to Hardest

The NFL has kicked off its season and we can see how the division race can shape out. The power has been shifted from team to team over the years and this year is no different. This season, it is clear what divisions appear to be a close race and which ones look the easiest to capture. For the last 2 decades, New England has owned the AFC East. A late surge by Buffalo last year still fell short to the Patriots who won all but two times since 2001. Buffalo the most complete squad this season and are the clear favorites to win for the first time in over two decades. What makes this division the easiest is simply because the other teams seem to be searching for identity. The Patriots lost the QB who won them their 6 titles and just don’t seem as strong. Their defense is decent and always has been under Bill Belichick yet the lack of a solid offense can be their downfall. Miami and New York both have younger teams and a ton of talent but they aren’t at that level to win. The Bills have the talent and opportunity to really take this division and run away with it. 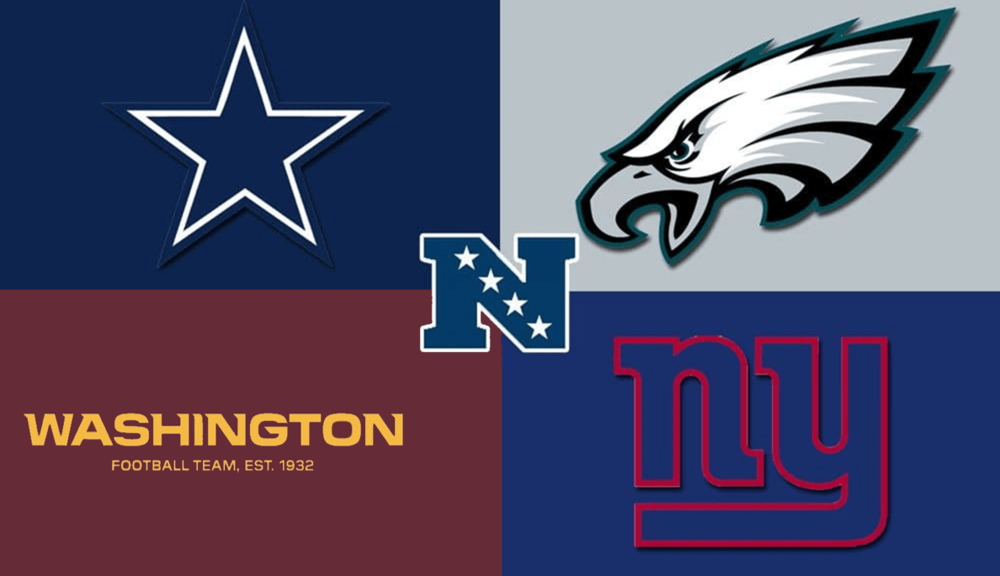 This division always tends to fall between the Cowboys and Eagles. In the last 10 years, all four teams won the division at least once. The current leaders of the group are the Washington Football Team who beat the Eagles in a comeback win led by their defense. Although Dallas lost week one, I expect them to win the division simply because their team is so much better on paper.The Cowboys may be on a shaky start but can win if Philly doesn’t get help.

This one basically writes itself. Baltimore is by far the team to beat in this division and proved that by beating the Browns 38-6. I definitely think every team has talent to compete but think ultimately the dominance of Baltimore is overwhelming. Pittsburgh may find themselves neck and neck for awhile with Big Ben back and their stout defense, but Baltimore should come out on top again.

The Super Bowl champions are going to win this division again. Denver has a ton of talent and one of the better equipped offenses right now but I can’t see them winning the West. The Las Vegas Raiders have a fast team with attitude under Jon Gruden but still don’t seem complete. LA has a nice team all-around but no one really sees them as competitors for the West either. Kansas City added an amazing run game when they selected Clyde Edwards-Helaire in the draft and his debut was a warning to the NFL. The only reason I see this division as fourth easiest is because Denver and Vegas should win a couple games to make it close. KC wins their 5th straight with ease.

Too Close for Comfort

This is where divisions are going to start getting a lot closer. Although the AFC South teams looked underwhelming this week, it should be a fight for the crown. 4 of the last 5 years saw close endings for the title race. Tennessee is the favorite but don’t sleep on the rest. Jacksonville are surprisingly leading right now after their win against an Indy team with no chemistry. I expect the Colts to sort of wake up and take advantage of the nice offense they have even with Philip Rivers being new in town. Houston may be without Deandre Hopkins, who they traded this offseason, but Deshaun Watson is legit and played nice week one. In the end, I see the Colts, Texans, and Titans going down to the wire late in the season. I do have Tennessee crowned for the first time since ’08 given they are the best all round here.

The NFC North has been a headache for a while now. Green Bay looked amazing in week 1 but still lacked a boom. The Vikings played a good game and ultimately lost yet still looked ok. Detroit and Chicago went down to the wire but both looked competitive from the start. Many analysts and betting sites have the Packers winning the division with Minnesota close behind but I think it is a tighter race. Green Bay is going to have a tougher time than anticipated andvcould be in second place fighting for first late this year. I can see the Bears, Vikings, and Packers all in the mix in December.

The Toughest Divisions This Year This division never seems to give answers early on. New Orleans has won the last couple years but the NFC South looks to have a 3-way race this year. This division is home to the best receivers in the game and it should be exciting to watch them battle. New Orleans are favorites but I think Atlanta and Tampa Bay are going to make it close throughout. Carolina isn’t going to be elite but I see them having a respectable record at the end. I can see the Saints barely winning this division over the Bucs with Atlanta close behind. The Panthers are the only reason why this division is second hardest, because number one is a toss up for who wins.

No one saw the Cardinals coming in hot with a huge win over the 49ers. The addition of Deandre Hopkins to help Kyler Murray really made the West closer. The Niners have a solid defense but their offense can hold them back early if they don’t have healthy receivers. LA really put the league on notice when they edged out the Cowboys in week one after a dazzling defensive performance. Seattle is the team that continues to be consistent year in and year out. Russell Wilson looked scary after beating the Falcons with a great game. Jamal Adams was a huge addition to the defense for Seattle but both their lines need improvement. The NFC West is by far the closest division in football right now, but Seattle should win it.