Andrew Booth Jr. is a solid prospect at the cornerback position. During his time at Clemson Booth saw a great deal of the field, meaning we’ve got plenty to look at here. His physical traits make him highly-valued, though he has some technique issues that could use some polishing. As a silhouette, he’s near-prototypical, perfect for most NFL defenses to mold into their scheme.

Preferred Position: Outside CB. He’s an effective run-stopping corner who can help take off the edge. He can play very well in man but would likely see better success in a zone coverage scheme.

Booth has long arms, just above standard for the NFL, and could be trained to use them well early in plays. His range is excellent with the ball incoming, and he’s able to interfere with passes seemingly at will. He displays great ball skills too, and if he is in close coverage there is always a risk of him stealing the ball away. 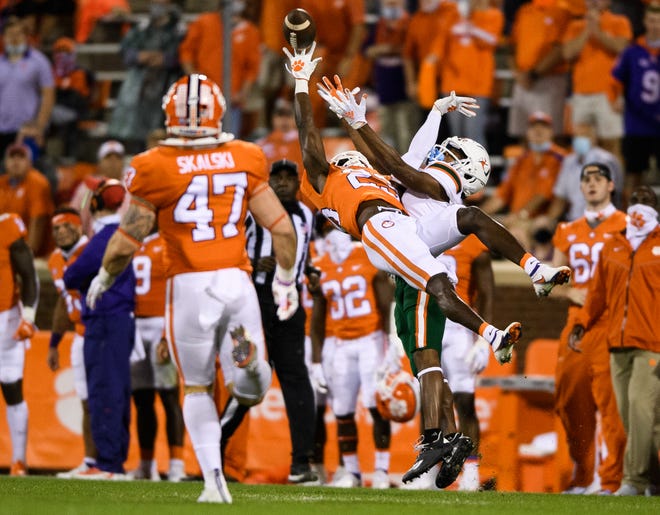 His excellent physical traits allow him to push though and shed blockers, making him particularly effective against WR screens and letting him blow up the edge on outside runs into his zone. Aggressive, with good instincts, Booth can contribute well when near a stacked box. He has excellent closing speed in run support, and his willingness to commit to the head-on tackle generally works to his benefit.

When in zone coverage, Andrew Booth Jr. gets his head around to play the ball every time, and never panics. Combined with his physical traits, this made his area of the field a no-fly zone during college. If he can bring that to the NFL, he’ll provide a complete and versatile tool kit with very few weaknesses past the five-yard mark, and it shows the possibility of development into a shutdown corner.

Lack of physicality at the beginning of the snap and his high pad level are major issues. Booth doesn’t make contact early to force a disadvantage when in press coverage at all, letting his receiver get into his route undisturbed. This inability to take the receiver off their route means his coverage has to be excellent when he gets downfield. It’s a trainable issue, but the fact he isn’t doing this already lowers his stock.

Because of his limited early-snap technique, he has to rely on physical traits downfield to account for a lack of advantage gained on his routes. He doesn’t put WRs in tough spots, so his attributes have to try to make up for that. They often do, but that won’t translate as well to the NFL and he would struggle as a rookie if given a CB1 role. Once again, his traits are excellent but this issue would take time to correct.

Andrew Booth Jr. throws his body into tackles, and has been known to go too low and miss. His attitude is right, but his technique needs work to avoid allowing big plays to develop whilst he picks grass out of his teeth. He tends to get outpaced in chase down scenarios too, meaning a missed tackle takes him out of the play.