Coming out of LSU, Derek Stingley Jr. is one of those prospects that could be anything from the Defensive Player of the Year to a personal trainer in a span of four seasons. His big question mark? His health, but if he’s able to stay upright he should take this league by storm. Previously projected as an early first-round pick, his injury concerns may let him fall, but it won’t be far. Let’s get into it.

Preferred Position: Outside CB, but he’s versatile enough to play inside when needed and is an effective run-stopping corner. 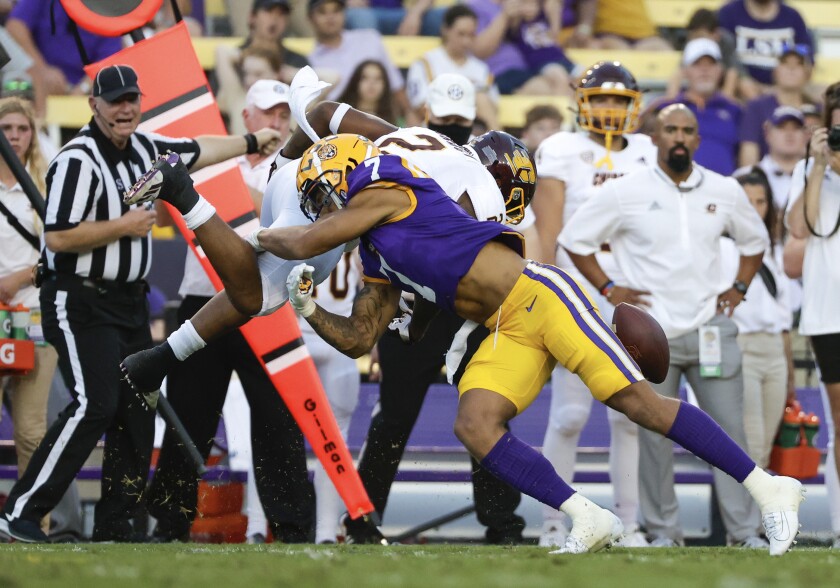 Derek Stingley has prototypical length and athleticism, pristine examples of the NFL’s standard for college prospects at this position. He can press receivers at the line at will, and still retreat into coverage once he’s gained the advantage. With the speed to combat any receiver and the physicality to tackle effectively in space, he’s not a liability in run-stopping nor at risk of getting juked out of his shoes by opposing skill positions. As a pure athlete, there aren’t many in this class with traits as clean.

He has experience as a receiver, which benefits him greatly on jump balls, as proven by his 2019 season. His hands are still that of a defender, or else he might still be playing on offense today, but for his position they’re top-tier. If he gets a chance at the ball, he’ll take it, and more often than not he’ll make it.

From what we’ve seen so far, Stingley’s instincts are elite. He rarely makes a bad read, and his constant proximity to the ball makes every catch a difficult one, even in the rare case of blown coverage. He finds passing lanes almost accidentally. With his back to the quarterback, he reads the receiver’s eyes and body language well to force incompletions. Consistently using the sideline to trap receivers in tough situations, he’s an excellent cornerback to play man coverage and travel with #1 targets each game.

After his breakout season in 2019, things went south for Derek Stingley. In 2020 and 2021, his seasons were derailed by significant injury issues that kept him off the field. In total, he played just three games this season. He may carry lingering damage from his final season at LSU, and largely because of his inability to stay on the field, we haven’t seen a lot from him since 2019. That being said, his 2019 season was incredible, and if he can stay healthy he could lock down NFL receivers as a rookie. Still, this is the most significant concern for Derek as he declares for the draft.

If you’re really looking for weaknesses in Stingley’s game, you may notice that he tends to commit to a tackle immediately, meaning if his read is incorrect then he’s getting dropped and the his area of the field becomes open to the offense. Not a large flaw, especially considering how consistently he follows his instincts to make the right read for a solid tackle. Still, it’s something to be aware of as he enters the pros.