After one of the best NFL seasons I have ever witnessed, it is only fitting that it ends with a big defensive play by of the best defensive players ever. After having a day to digest the Super Bowl and gather my thoughts, here are my winners and loser from Super Bowl Weekend 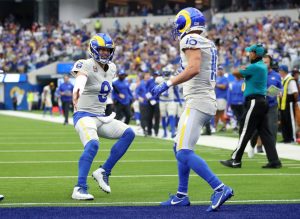 Although Stafford wasn’t perfect, he showed up on the biggest drive in the fourth quarter. He made a beautiful no-look throw to Cooper Kupp for a 22 yard gain, which was the first big gain for the Rams in the second half. He later threw the game-winning touchdown pass to Cooper Kupp on a 2nd and goal. However, as we mentioned on the podcast, Stafford was guaranteed to make some bone-headed decisions and he did. Even though Skowronek got a hand on the ball, Stafford overthrew that ball which resulted in the pick, and he missed many throws in the third and fourth quarter. In the end, he finally got a Super Bowl ring that had eluded him for so long.

Odell Beckham was on pace to have a Super Bowl MVP game before his unfortunate injury derailed his game. He had a beautiful catch over Mike Hilton and a 35-yard catch after the run and was taking advantage of all the opportunities due to the defense focusing on Kupp. Once OBJ got hurt, this offense took a big hit.

The Super Bowl MVP, Cooper Kupp. What a season he had. One of the best, if not THE BEST, receiver seasons. With 8 receptions 92 yards and two touchdowns, Kupp made the two biggest plays of the game. First, the end around on the fourth down to keep the drive alive and then the touchdown catch to give the Rams the lead. Kupp was targeted 7 times on the final drive(3 negated for penalties) and caught 4 passes for 39 yards and a touchdown.

Higgins in the biggest game of his career scored both of the Bengal’s touchdowns. The big momentum shift that I thought for sure gave the Bengals the game was the big 75-yard touchdown to Higgins on the first play of the second half. Higgins was key for the Bengals throughout their playoff run once defenses started to focus on Ja’Marr Chase.

Chase vs Ramsey did not disappoint. Chase got the better of Ramsey the first time when he burnt him on a deep 46 yards pass. He had a big play to start the last drive of the game when he had a catch and run of 17 yards. As we expected, Chase was effective in the short pass game and in the slot and on the biggest stage of his career against the best corner in the game, he did not disappoint.

Burrow averaged 2.41 seconds to throw, the second-lowest mark of his career. Burrow made one glaring mistake which was missing Tee Higgins on the first 4th and 1 when he forced the ball into Ja’Marr Chase. If he finds Higgins, he picks up the first and potentially a touchdown. However, on Higgins’s 75-yard touchdown, Burrow felt instant pressure stepped up to the right hash and threw the ball about 40-45 yards downfield to the left side of the field. It was one of many, impressive throws by Burrow. Burrow was sacked by 7 times and constantly had pressure yet made throw after throw to keep the Bengals in the game. Burrow threw for 263 yards and a touchdown. This is certainly not the last Super Bowl we will see Joe Burrow in. 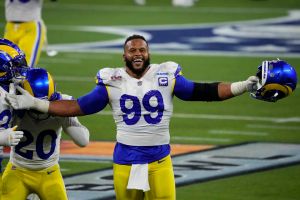 Is there really anything to say about this man. Double teamed, triple-teamed, Donald still finds a way to win. He made the game-winning play against the Niners and then the Bengals. He was constantly getting the Burrow and had two sacks as well. On the third and 1 with 1 minute left, he held back Perine from getting the first and set the Bengals up for the fourth down. If this is the end for Aaron Donald, he had one of the best careers in NFL History and has solidified himself as one of the all-time greats

Drake won 1.4 million dollars on the Super Bowl with the only bet he lost being Odell over 62.5 receiving yards. His all bets on family moto paid off. 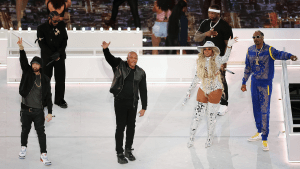 This was a great halftime show with great performances from everyone involved. A great mix between the old generation and the new generation(Kendrick) and it was great to hear rap involved in the Super Bowl.

The Eli Apple slander is hilarious and deserved, but the Bengals might not have been here if it wasn’t for him. He made the big tip on Tannehill’s pass that was intercepted by Logan Wilson and set them up for the field goal and then made the tackle on Tyreek Hill to end the half which changed the momentum. However, if you are going to talk like a number one corner, you better play like it. he got torched by Kupp all game and the winning touchdown was scored on him. Poetic Justice for Chiefs, Saints, and Giants fans. 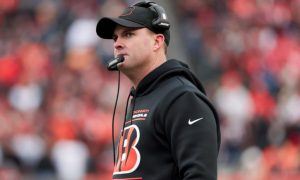 I’m still not completely sold on Zac Taylor. He has had many questionable play calls throughout the playoffs and with the game on the line, it finally showed. Mixon was averaging 4.2 yards per carrying and is a 3 down back but with the game on the line, you run the ball with Samaje Perine? A man who has 0 carries until the SB. And then on third and one you run the ball with Perine instead of Mixon. Interesting. Also, another play call that was extremely questionable was the extremely early decision to go for it on 4th and 1. He is still young, but I am not buying the Zac Taylor hype.

Bengals O-Line let up 7 sacks and gave Joe Burrow 2.73 seconds to throw. On the final drive of the game, Burrow had Chase wide open but the O-Line failed to block Donald leading to a wild throw to end the game.

Is it really an NFL game without controversy. The refs missed a big PI call on Tee Higgins which resulted in 7 points for the Bengals. Then they missed a false start on the Rams which resulted in the defensive holding call on third down. On the biggest stage of football, these refs have to be better and held accountable.