We often hear people say that the most important player on a team is the backup QB, and in recent years this has been proven true. Not long ago the Eagles won their first ever Super Bowl 41-33 over the Patriots, courtesy of Super Bowl MVP Nick Foles, who stepped up when starter Carson Wentz was injured against the Rams in their week 14 matchup.
In 2020, the increased number of talented QBs has pushed a few down the depth chart, and left others off rosters entirely. But which backups can see action once more with their current teams? 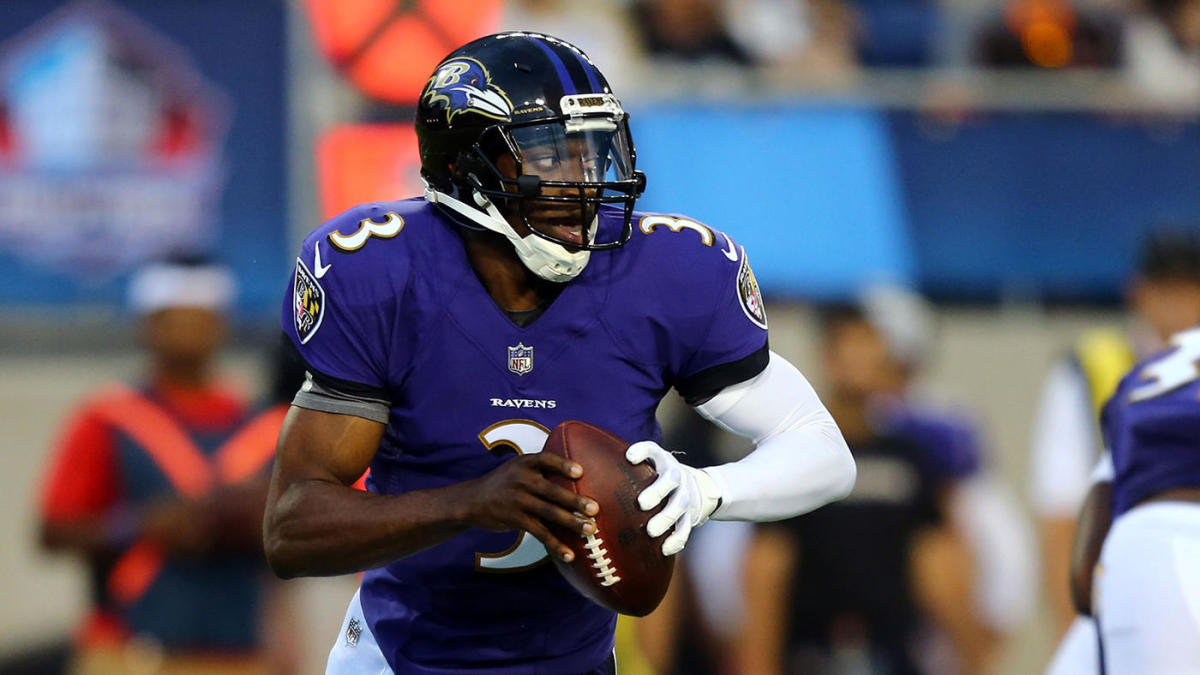 There is a number of reasons RGIII makes this list. For starters, his competitor, Lamar Jackson. Lamar is establishing himself as the greatest mobile quarterback since Mike Vick and getting injured is increasingly likely the more your QB leaves the pocket, which would see Griffin have his name called. Second, teams are often reluctant to pay mobile quarterbacks due to their decreased longevity, as well as their need to reserve pay for their blockers. Lamar will be expecting a big pay day in the coming seasons, which could easily lead to a dispute, holdout, and a starting job once again for the former Baylor Bear.

Griffin has made clear that he wishes to be a starter again, but has also stated he is open to playing a bigger role as backup in the Ravens offense, so either way he should see action. But could he succeed as a starter in a top 3 offense? Well, playing alongside their young talents Brown, Dobbins and Boykin, as well as veterans Ingram and Snead, and supported by a top defense, it’s hard to see how he wouldn’t.

Jameis is coming off perhaps the most unflattering yet somewhat impressive season ever seen. In 2019, with offensive weapons Mike Evans and Chris Godwin, Winston amounted to 5,109 yards and 33 touchdowns to 30 interceptions, leading the league in both interceptions and passing yards. However, the bad outweighed the good, the Bucs ended the season 7-9, and Winston was replaced.
Now in New Orleans on a 1-year deal, Jameis will be competing with Taysom Hill for the backup spot, with Brees the certain starter. Hill has been the assumed heir to the starting spot, but at this point, it’s hard to put a guy with just 6 career completions ahead of the reigning passing yards leader, especially when one has the resume of Jameis Winston.

The past seasons haven’t been kind to Winston, but he maintains his confidence that he is among the best in the league. Winston clearly has talent, but if quarterback guru Bruce Arians couldn’t bring it out of him, what’s saying Sean Payton can? Well, how about playing in a top 5 offense? Whatever the situation, it will be interesting to see if Jameis remains in NOLA when Brees hands over the torch.

Unfortunately for Foles, the season after his big break saw him return to the bench upon Wentz’s return, and his 2019 season in Jacksonville was plagued with injury from the get-go, injuring his shoulder in week 1. Being benched for rookie Gardner Minshew in week 13, Foles joined the Bears this off-season. In 2019, Chicago boasted a top 5 defense, and top 10 offensive line. However, this went unrecognised by most as they finished 8-8 – largely due to poor passing performances from Mitch Trubisky.
The Bears now have a potentially decent offense to compliment the D, with veterans Jimmy Graham and Ted Ginn Jr. joining Allen Robinson and 2nd year back David Montgomery, who is expected to be among the biggest breakout players next season.

It is not unlikely that Nick Foles will beat out Trubisky for the starting job in Chi-Town, and if he can find his game as he did in 2018, the Bears could be a surprise contender 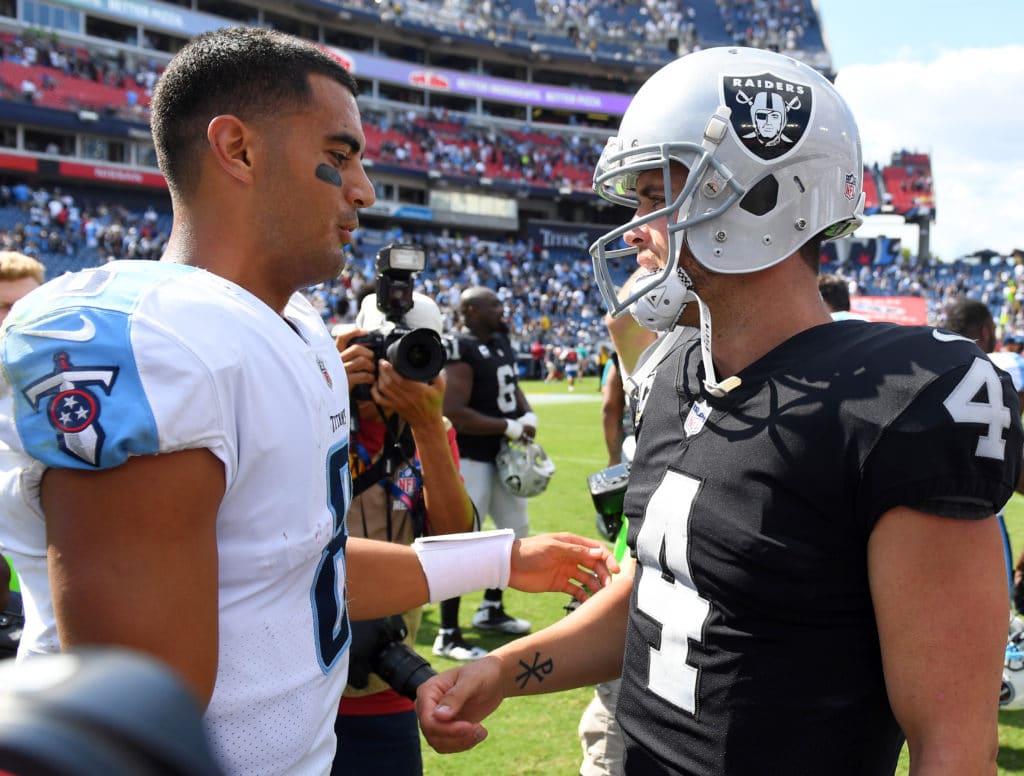 Mariota is perhaps the most likely player of all on this list to see action this season, but many are speculating that he will not play his traditional quarterback role in Vegas. Similar to the Saints Taysom Hill, in recent days it has been rumoured that Mariota will play out of position – not so surprising that they would want to see something out of him, considering he has the 3rd biggest contract among backups.

Of course, that is assuming that Mariota doesn’t win the starting spot in Nevada. While Carr performed well in 2019, and has a promising offence around him in 2020, Mariota is still expected by some to win the job during the season. It is hard to see that despite long-term the support of Mayock and Gruden, Carr will be replaced. However, this re-brand is an opportunity to seek success, and the Raiders will not let any single player stand in the way. If the Raiders can’t make anything of such offensive talent, it will be clear the QB is the issue – and Mariota will surely leap at the opportunity to be a starter once again.

Dalton is another player to find a new home this off-season. The Bengals selected LSU QB Joe Burrow with the 1st overall pick in the draft, and just days later released their long-term starter. Despite his competition in free agency, it wasn’t long before he was picked up by the Dallas Cowboys.

Until recently, the Cowboys seemed set to move on with Dak as their QB1, but Prescott’s job may not be as secure as he thinks. Dallas has been reluctant to give Prescott the deal he is after – rumoured to be in the region of $40 million per year.

If Dak does continue to hold out, then Dalton will almost certainly get the nod. Right now, he is perhaps the best backup in the league, having spent the previous 9 years as the starter in Cincinnati, where he amounted to 31,594 yards and 204 touchdowns. In recent years the Cowboys have been little more than mediocre, but in an offense consisting of star players such as Amari Cooper, Ezekiel Elliott and rookie CeeDee Lamb, dropping back behind a top 5 o-line, almost any QB could see somewhat success, which is why the Cowboys need to see results before they throw money at a QB. Being paid just $7 million through 2020, Dalton could be their guy if they can’t figure things out with Dak.