The Denver Broncos are the most attractive landing spot for any quarterback this offseason. They have an elite defense, a young and electric receiving core, and a great duo in the backfield with over $35 million in cap this offseason. The Broncos are a quarterback away from being Super Bowl contenders as they went 7-9 with Drew Lock and Teddy B at the helm. With a plethora of QBs supposedly on the move, I have outlined trade targets, free agents, and draft prospects the Broncos could likely get to compete for a Super Bowl. Who is the next Denver Broncos Quarterback?

I believe this is one of the most likely destinations for Aaron Rodgers this offseason. The Broncos have the draft capital and players to make a move for one of the best quarterbacks to ever play. The Broncos boasted a top 10 defense and have an extremely young secondary that I believe can be top 5 in the years to come. Offensively, you have the likes of Jeudy, Sutton, and Hamler making up a young talented receiver core that can only get better. In addition, they have a young stud at running back in Javonte Williams. Although the AFC is extremely competitive, adding a top 2 quarterback to your roster would make the Broncos one of the favorites out west.

Wilson is my second trade target for the Broncos, but with conflicting reports coming out on his trade motivations, I don’t know what to expect. However, with the team’s capital, they can definitely make a tasty offer to the Seahawks for one of the elite quarterbacks in the NFL. With Wilson’s ability to extend plays and elite accuracy in the pocket, he would add a whole new element to this offense, much like Rodgers would.

Although he is probably the least enticing option on this list, Jimmy G is a proven winner. He isn’t an elite quarterback by any means and might barely be above average, but with new coaching and a nasty duo in the backfield, they can tailor a scheme like Shanahan to make the running backs the focal point. Their offense has the skills to be explosive, and they could just need a slightly above-average quarterback to showcase that. 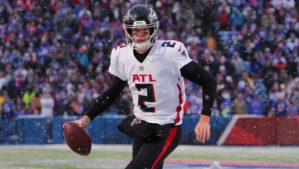 Ryan is an extremely unlikely option, but he would be a solid option nonetheless for the Broncos and would likely cost them very little compared to Wilson and Rodgers. Ryan has definitely dropped off since his MVP season in 2016, but he is still a top 15 quarterback in the NFL. Matt Ryan threw for about 4000 yards, 20 touchdowns, and 12 interceptions without having his number one receiver, Calvin Ridley, for most of the season. With a solid running game and a multitude of weapons, I believe Ryan could thrust himself back into being in the top 10 quarterback convo, and could possibly lead the Broncos to the playoffs.

Winston proved all the doubters wrong as he threw for 1170 yards, 14 touchdowns, and 3 interceptions en route to a 5-2 record when healthy. His decision-making is much improved and I was also impressed with his mobility as well. His deep ball is deadly and he could make this offense explosive. He would be a relatively cheap price and although he wouldn’t make the Broncos Super Bowl contenders, he would certainly put them in playoff contention.

Teddy B was extremely disappointing for the Broncos but with such a shallow FA class and most quarterbacks requiring a hefty sum, Teddy B might be in for round 2 for the Broncos. 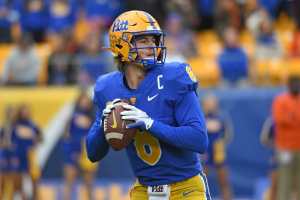 Kenny Pickett has been labeled as the most pro-ready quarterback in this draft by many scouts and for a team that’s a QB away from being in win-now mode, Pickett would be the perfect quarterback for the Broncos. Although he doesn’t have insane arm talent, he has good size and great ability to keep the play alive and make plays with his legs and arm when scrambling out of the pocket.

Corral is likely going to be the second or third quarterback taken in this draft class, but the way Corral plays football with his intensity and passion makes me love him as a player. His decision-making is still questionable and his deep throws lack consistency, but he has a quick release and is elite on the ground, and in an RPO offense, he can thrive.

Drew Lock hasn’t shown any signs of being a franchise guy, but if the Broncos are reluctant in the QB market, Lock may have one more chance. In his first full season as a starter, he threw for 2933 yards, 16 touchdowns, and 15 interceptions en route to a 4-9 record. Lock was really impressed in their loss against the Raiders as he made a plethora of good throws and showcased his improvement in decision makings. However, I do not believe Lock is the Denver Broncos Quarterback if they want to be in contention for the Super Bowl, let alone the playoffs.