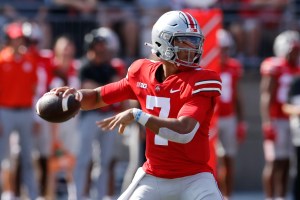 The 2022 NFL Draft has concluded which means it is time to tear down the banners of celebration for Draft Day, put the 2022 notebook away and open a new one. The 2023 Draft class is already looking stacked with several potential blue-chip, instant impact players at the top of the class as well as a good amount of high-quality talent elsewhere. However, one particular area where the talent is much greater than that of the 2022 draft is the quarterback position. Headed up by some big- names, the 2023 quarterback class has the potential to have the most selected in round one since 1983. Who is at the top and who is in the running for QB1?

The 2023 draft will likely revolve around two major names. Bryce Young and CJ Stroud. They are already the talk of the town nearly a year before the actual draft and both have a ton of translatable traits that foreshadows success on the NFL level. However, right now, which one of these two premier college quarterbacks is better?

Alabama’s Bryce Young is the Heisman Trophy winner in 2021. He has had an outstanding season and deserves to be in the talk for the first overall selection next April. Despite his smaller stature, Young possesses outstanding arm strength. The ball comes out with fire when he releases it. Speaking of his release, it is one of the quickest and smoothest releases I have seen on a quarterback. Young also showcases solid accuracy throughout the short and intermediate parts of the field. His timing is almost too good, as the ball typically comes out before the receiver is even out of their stem. That is what we look for when evaluating quarterbacks. To me, it is important that quarterbacks are able to use their legs in 2022. They need to be able to extend plays outside of the pocket and make plays on the ground. Although Young isn’t a run-first quarterback like Malik Willis, he can certainly extend plays with mobility and athleticism and even make some. My last major strength for Young is his mental ability. Alabama has a system that asks the quarterback to usually read one to two, but not much past that. Young is able to work through those progressions as well as analyze the defense and make safe decisions as to where to put the ball so the mental aspect is certainly there.

As for things I’d like to see Young improve, we’ll start with accuracy. His short and intermediate throws charted well, however, Young did not do as well deep. You frequently see overthrows coming deep and it is really spotty in terms of what he completes and misses. My second major problem with Young is his tendency to throw off of the back foot. Going through his film, I saw Young work with decent footwork up until his release, where rather than stepping into his throw, he stepped back or got back on his heels which hurts the velocity and arm strength and can even affect accuracy. Finally, while I feel he has excellent poise under pressure if the pressure doesn’t come, Young gets too jittery in the pocket. I’ll need to see that improve. Overall, Young does project well and his floor right now is very high.

Young’s counterpart – CJ Stroud – also made his way into Heisman voting this year. While he did not win, Stroud still showed excellent qualities on tape which make me really excited for what is to come in his young career. Stroud is built well at 6’3’’ and 215 pounds. He has the frame to compete and like Young, his arm is insane. Stroud can put it anywhere he needs to on the field. His deep ball is beautiful. When he is able to get his accuracy right, he can sit back and shred defenses for 400-500 yards a game. He’s got smooth, solid mechanics and the ability to extend plays as well although I wouldn’t consider him a threat as a runner. In 2021, my big knock on Justin Fields, Stroud’s predecessor, was his inability to read the field and go through progressions in the Ohio State system. Stroud breaks the mold and is able to do so at a solid level, although he’s still got some work to do and clean up in that area.

However, Stroud is less complete now and will certainly need to develop in some aspects. As I mentioned, while Stroud can show the ability to break from the one-read offense and make progressions, I want to see it more often. He has a tendency to force the football into some tight windows and while that isn’t necessarily a bad thing, it can be dangerous. My biggest concern with Stroud is his inconsistent ball placement. Sometimes, the deep ball is off. Sometimes slants and crossers are behind the receiver. Sometimes hitches and comebacks are thrown too high. Stroud’s ball placement is just a little sloppy. It could be because of how little he varies velocity on the football. Almost all of his throws are touch passes. He’s got to learn when touch passes are appropriate and when they need to become bullet passes or high passes. Just a little bit of evolution in that sense. As a whole though, if Stroud can clean up his accuracy, you are looking at a near generational quarterback talent. 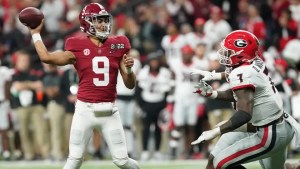 So…Who is the Favorite to be QB1?

This debate is tight. I’m talking splitting the hairs tight. Teams that have to pick between the two will likely have to exhaust every resource they have to decide who is the better quarterback. Based on floor, I’d give it to Young. However, based on ceiling I’d give it to Stroud. I’ve gone back on forth multiple times before I sat down to finish this article because I was so unsure. I usually favor the quarterback with the highest ceiling – take Zach Wilson or Malik Willis for instance – however, this year, for now, I am siding with Alabama’s Bryce Young. CJ Stroud is a betting favorite and if you like him over Young, I completely understand. They are so close that it is very hard to knock someone for having him over Young. However, Young’s floor is very enticing as-is and although his weaknesses are a cause for concern, ultimately I think his weaknesses are more nitpicky things than Stroud’s. So, for now, I am going with Bryce Young, but that does not mean it’s in ink. CJ Stroud could easily become the best quarterback in the class by next spring, it is all about who has the better year and develops more in 2022. The last question to ask is: Is there another? Who else could be in contention for QB1? For the most part, I think it’ll be down to Stroud or Young, but names to keep an eye on are Miami’s Tyler Van Dyke and BYU’s Jarren Hall. Kentucky’s Will Levis could be in that conversation, but with the departure of some key offensive weapons, he could regress. Whoever may be at the top of the board in April of 2023, this draft is sure to be much more exciting and stacked than in 2022. Head over to my Instagram @gdn_scouting to find scouting reports on all these guys as the summer progresses.