Welcome to the first edition of Top 10 Free Agents. At The Sports Wave over the next few weeks, we will be discussing the top 10 free agents at each position. Today, I will be giving my top 10 free-agent quarterbacks. Although I expect there to be a hefty movement with quarterbacks, that should be through trades rather than FA, there are still some decent options in free agency that elevate teams to playoff contenders.

Jameis Winston as a starter for the Saints was 5-2 and had them sitting atop the NFC South and the NFC prior to his season-ending injury. He played the best and most efficient football of his career throwing for 1170 yards, 14 touchdowns, and 3 interceptions boasting a passer rating of 102.8. The Saints receiver core consisted of Marquez Callaway, Deonte Harris, and Tre’Quan Smith. With Michael Thomas returning and the Saints projected to draft a receiver in the first round, Winston can only get better. With Wilson, Watson, and Rodgers demanding a hefty demand through trade and Cousins and Garropolo boasting heft contracts that they have not lived up to, resigning Winston to a cheaper deal would be the best move for this team to keep them in title contention, even without Sean Payton.

Teddy B got another shot as a starter in this league and failed to impress. He started the year 3-0 as the Broncos shocked most of the world, but once their schedule got tough, they faltered as Bridgewater finished 7-8 as a starter. Bridgewater threw for 3052 yards, 18 touchdowns, and 7 interceptions. Bridgewater could be a great option for a team with a rookie quarterback not willing to throw them into action right away. Bridgewater is a player that can win you a few games with his conservative playstyle, but he is not a player that can take you to the playoff, let alone the super bowl.

After a sensational comeback against the Chiefs, the Titans thought they had their franchise guy. But just two seasons later, Mariota had taken a backseat to Tannehill and was a free agent. Mariota has been used as the wildcat quarterback for the Raiders and has still shown he can make big plays with his feet. When Carr got hurt last year vs the Chargers, Mariota threw for 226 yards 1 touchdown, and 1 interception while rushing for 88 yards and 1 touchdown. Although there are still huge question marks regarding his passing, a scheme built around his legs can open up the field for Mariota and hide his passing struggles.

Tyrod Taylor has been through it all as an NFL quarterback. From losing his starting job due to a nasty concussion to getting his lungs punctured by team doctors. Taylor finished 2-3 as a starter but kept every game close losing 31-21 to the Browns, 17-9 to the Dolphins, and 21-14 to the Jets(bad losses). Much like Bridgewater, Taylor should be a bridge quarterback to help mentor a younger quarterback but I do not see Taylor picking up a starting job in the NFL.

Fitzmagic, unfortunately, suffered a season-ending injury in week 1 against the Los Angeles Chargers. Fitzpatrick, last year for the Dolphins, started the year before getting benched for Tua. Off the bench, however, Fitzpatrick proved to be a vital piece in keeping the Dolphins in playoff contention, winning them several games. He could be a solid backup quarterback and a player that can come off the bench to win games, as he showed in Miami last year.

Mitch may end up getting a starting job given how young he is compared to the other free agent quarterbacks. Trubisky gets a deal of hate, but I truly do not think he was the huge problem he was made out to be in Chicago. Although he only made the playoffs twice in Chicago, the Bears were in playoff contention two of his last three years. Now after being behind Josh Allen and Brian Daboll for a year(look how much better Jameis played after being behind Brees for a year), I think he may be ready to start on a team that wants a quarterback for cheap.

Andy Dalton struggled mightily this year, as did every quarterback for the Bears did and it certainly did not help his stock entering FA. He threw for 1515 yards, 8 touchdowns, and 9 interceptions in 8 games. Last year after Dak got hurt, in the terrible NFC East, Dalton was one game away from making the playoffs with the Cowboys, and with a better defense, he might have made the playoffs. However, I think much like Taylor and Fitzpatrick, he can be a bridge quarterback to help mentor the younger quarterbacks 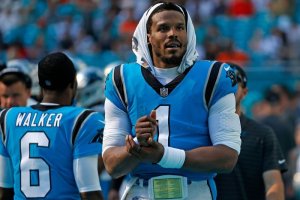 “IM BACK” – Cam Newton(For one week). As hard as I was rooting for Cam, he showed us why Mac Jones got the starting job over him as he was benched multiple times for the Panthers. He threw for 584 yards, 4 touchdowns, and 5 interceptions and rushed for 230 yards and 5 touchdowns. With the right scheme catered to Newton’s rushing, I think Newton could suffice one more season in Carolina as neither Sam Darnold nor PJ Walker showed they were much better. Unless they go all-in for trade at quarterback, I think the Panthers run it back with Newton one more time and live to fight another year.

Brissett was 2-4 as a starter and threw for 1283 yards, 5 touchdowns and 4 interceptions. Brisett showed some promise when he played for the Patriots but when he had the opportunity to start for the Colts, he went 7-9 and missed the playoff, including going 1-5 to end the season. Brissett should stay with the Dolphins as a backup.

I really do not have much to say about Foles. Other than his Super Bowl run, he really has failed everytime he has been a starter. At this point in his career, he will defintely be a backup or third stringer.

Previous articleAmerica’s Favorite Kicker: Evan McPherson
Next articleTampa Bay Buccaneers: Where do they turn to now?