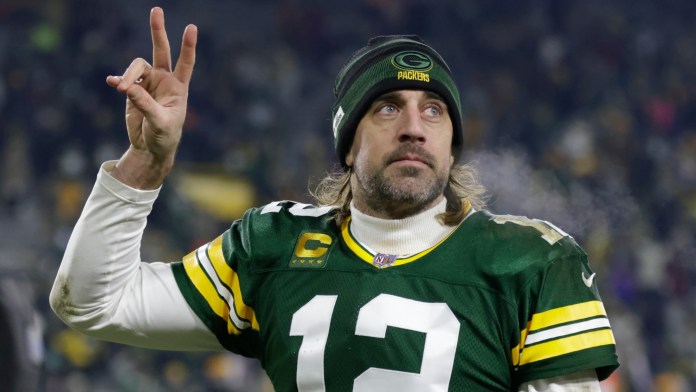 One of the biggest names in the NFL is more than likely on the move this offseason. Aaron Rodgers has been with the Green Bay Packers since 2005, when they drafted him out of Cal and has only won one Super Bowl. It’s easy to say, that this veteran QB needs a change of scenery and wants another Super Bowl before he rides off into the sunset. In this article, we break down why these five teams have the potential to land Aaron Rodgers.

Ever since Peyton Manning left after the Super Bowl win in 2016, this team has yet to find success at the QB position. Eleven starting quarterbacks in 6 years is not something to be proud of, and this Denver team is desperate to find success.

This offseason we saw Denver hire former Packers Offensive Coordinator, Nathaniel Hackett to be their next head coach. They also named Packers Tight Ends Coach, Justin Outten as their next Offensive Coordinator. These hires alone make Denver the frontrunner to land Rodgers. He would be familiar with the style of play that Hackett and Outten like to implement, and has already established a connection with them on a personal level as well.

Looking at the Broncos roster, this team is nothing short of talent. Aaron would have plenty of weapons to utilize including Courtland Sutton, Jerry Jeudy, Noah Fant, and Tim Patrick. The offensive line is pretty good, and the defense definitely holds its own. I would not be surprised if we saw Rodgers suit up as a Bronco next season.

At first, this team probably wasn’t even mentioned when talking about where Rodgers might go. However, recent news broke that Rodgers bought land in Nashville last week, and thinking about it now, Rodgers as a Titan makes a lot of sense.

The AFC South as a whole has not been a very competitive division, and the Titans are easily considered to be the best team even without Rodgers. Ryan Tannehill has been extremely inconsistent as the starting QB, and the Titans are in win-now mode. With A.J. Brown, Julio Jones, and Derrick Henry on the team, Rodgers would be able to command a productive offense.

The biggest issue with Tennessee is the cap space. Going into the 2022 offseason, the Titans are almost negative 7 million in cap, and might have to rework some contracts in order to sign Rodgers. Tannehill signed a contract in 2020 worth 118 million over the span of four years, and that alone would conflict with pursuing Aaron.

Ever since Andrew Luck’s abrupt 2019 retirement, this Colts team has not garnered the success they have wanted. Trading for Philip Rivers in 2020 was a temporary fix, and Carson Wentz has not played to the caliber needed.

Bringing in a veteran quarterback like Aaron Rodgers would tie this offense together perfectly, and would allow the Colts to compete with their division rival, the Tennessee Titans. Rodgers would have Michael Pittman, T.Y. Hilton, Parris Campbell, and Jack Doyle to throw to, with Jonathan Taylor in the back field.

In order to acquire Rodgers, the Colts would have to find a solution for Carson Wentz. Carson has yet to prove himself to be a strong QB1 and is considered to be injury prone. Currently, Wentz is signed to a 4 year, 128 million dollar contract mostly paid for by the Eagles. If the Colts were to simply cut Wentz, they would save 13.3 million, and would make room for Aaron to come to Indy.

This wouldn’t be the first time a top of the line QB strolls into Tampa. Tom Brady found great success in his time with the Bucs, leading them to a Super Bowl victory over the Chiefs in 2021. Although Rodgers does not have the same playoff pedigree, its easy to believe that he could bring the Bucs some silverware.

With Brady announcing that he is finally going to retire, Tampa is looking for his successor. In the 2021 NFL Draft, the Bucs drafted Kyle Trask out of Florida, and in my opinion he is not ready to take the open QB job that Tom Brady left. The Bucs also have backup QB, Blaine Gabbert, and even though he took the Jaguars to an AFC Championship a few years ago, he is probably not the answer either.

If Rodgers came to Tampa, he’d be playing behind one of the best lines in the NFL, with plenty of talent; Mike Evans, Rob Gronkowski, Chris Godwin, etc. He’d be playing in one of the easiest divisions in football. Easily, he could grasp a number one or two seed going into the playoffs.

It seems like every year, this team somehow finds their way into the playoffs. The fight and tenacity that Kyle Shanahan drills into this team is truly impressive, and would be even more impressive with Aaron Rodgers under center.

Currently the 49ers have the quarterback with the most Super Bowl rings among active QBs; Jimmy Garoppolo. He’s proven himself to be extremely inconsistent and has yet to be the quarterback that Shanahan wants him to be. Garoppolo has dealt with some injuries and certainly isn’t the long term answer for San Fran.

Bringing in Rodgers would be huge for this team and has the potential to boost them to the next level. With Deebo Samuel, George Kittle, and Brandon Aiyuk, this offense could be next to impossible to stop. The 49ers also drafted Trey Lance in 2021, who would be their go-to guy wants Rodgers finally decides to hang up the cleats.