This game held major implications regarding the relegation battle and with this win, Norwich climb out of the bottom three for the first time this season. Watford, on the other hand, now finds themselves in the bottom three.

Watford was without starting goalkeeper Ben Foster due to a positive coronavirus test. They only allowed two shots on target all game which both led to goals. The final nail in the coffin was put in by their own player with Juraj Kucka turning in an Adam Idah cross into his own net in stoppage time.

The game was a complete mess from Watford. The main highlights, or lowlights if you will, were Kucka’s own goal and an Emmanuel Dennis red card. Watford’s management has a history of quick rotation of managers so it is interesting to see if manager Claudio Ranieri will keep his job following this result. 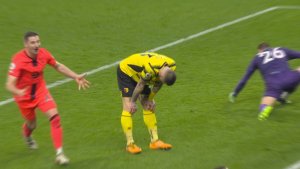 Norwich has now won back-to-back games for the second time this season. Josh Sargent, who was scoreless in his previous eighteen Premier League appearances, nets two goals in a huge confidence-boosting performance. There seems to be a real belief that Norwich can stay up this season.

Watford faces bottom-of-the-table Burnley in their next fixture. With this loss, that game becomes arguably the most important of the season. A loss would almost solidify their spot for relegation.

Norwich faces midtable Crystal Palace in the league after an FA Cup 4th Round fixture against Wolves. Norwich can relax a bit following this win but know they need a lot more points to secure a spot in the Premier League next season.