Was trading Bradley Chubb the right move for Denver?

Last Tuesday, the Denver Broncos traded pass-rusher Bradley Chubb to the Miami Dolphins. Chubb was having the best season of his career in Denver, and many questioned if trading him was the right decision.

One of, if not the biggest, reasons why the Broncos pulled the trigger on this trade was the return of a first-round pick. After trading 2 first-round picks and more compensation to the Seahawks for Russell Wilson, the Broncos had little draft capital.

With the addition of the first-round pick, Denver now has more flexibility, and the ability to add a quality starter to next year’s roster. Another factor that ties into this trade is what George Paton will do with the newly acquired first-round pick. Paton has a great record in the draft for the Broncos. He’s drafted Patrick Surtain Jr., Javonte Williams, and others who have contributed nicely to the roster.

Positions that George Paton could be looking at in the draft are offensive tackle, middle linebacker, cornerback, and running back. When the Dolphins acquired Bradley Chubb, they made it their top priority to sign him to a long-term extension. Miami signed him to a five-year extension that is worth $110 million and incentives can boost it to $111.25 million, per Adam Schefter.

Unlike the Dolphins, the Broncos weren’t willing to pay Bradley Chubb $22 million per season. Denver understands that they will have a lot of young stars to re-sign, and didn’t want to break the bank on Chubb.

Believe in the depth 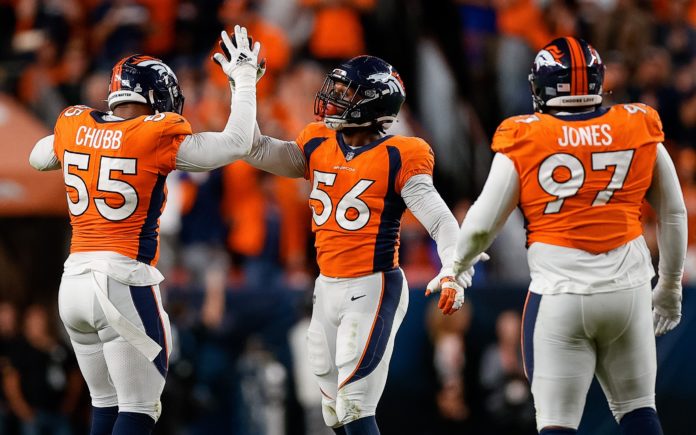 During his press conference shortly after the trade deadline passed, George Paton spoke about the trade and why he felt it was the right move. One thing I noticed was how highly he spoke of the depth the Broncos have at the outside linebacker position.

Baron Browning and Nik Bonitto have shown in limited playing time that they possess attributes of a great pass rusher. While I’m sad to see Chubb go, I am very excited to see Browning and Bonitto get more playing time, and develop into the stars I know they can be.

I believe George Paton is looking at the bigger picture when it comes to the defense. Paton has faith in Ejiro Evero, who has done an amazing job with their defense. Evero can develop Denver’s young defensive players into superstars.

The Bronco’s front office understands the talent they have at outside linebacker and still believes this team can have a great second half. The goal remains the same, win the AFC West.

Was this the right move?

Yes, I do believe trading Bradley Chubb was the right decision.

When Denver drafted Chubb fifth overall, I had high hopes that Chubb and Von Miller would be an unstoppable duo. Unfortunately, Chubb hasn’t developed into the star pass rusher I thought he would become. He struggled to stay healthy, and never found consistency on the field.

Trading him gives the Broncos a lot more options and flexibility. While the season isn’t over, this trade will help them put better players around Russell Wilson. I also believe that Baron Browning will develop into a superstar. I like what I’ve seen from him, and am excited to see how he performs with more playing time.

The front office and coaching staff saw something in Baron Browning that prompted them to make him an edge rusher. He’s been amazing so far, and he can only improve moving forward.

Coming off a bye week, Denver will turn their focus to the Tenessee Titans. The medical staff hopes to get Baron Browning back on the field Sunday.