As was the same for many teams, the Bucs did not get the start they had hoped for in week 1 – but they turned it right around in week 2 versus the Panthers. After a concerning performance versus New Orleans, Brady started to find his rhythm in week 2, connecting with WR Mike Evans on 7 passes which were taken for 104 yards and a touchdown on their way to a win.
The big guys on both sides of the ball had a lot to be pleased with about their performances too, as the defense sacked Bridgewater 5 times and held McCaffrey to just 59 yards. On offense, the line jelled together nicely, keeping Brady safe from any sacks, and allowing Fournette to break off for 103 yards and 2 TDs off just 12 carries. Their defense – which was seen as the biggest weakness in preseason – is looking strong after week 2.

The Bucs are not in the clear quite yet. Brady may have won this game, but he didn’t look totally comfortable in his offense, going 23/35 on completions, with 1 pick. Gronk continued to have production issues also, and despite Brady dismissing his concerns, the Bucs will need to get it together in the coming weeks. They face the Broncos, Chargers and Bears – 3 teams, each with a more dangerous secondary than the next. 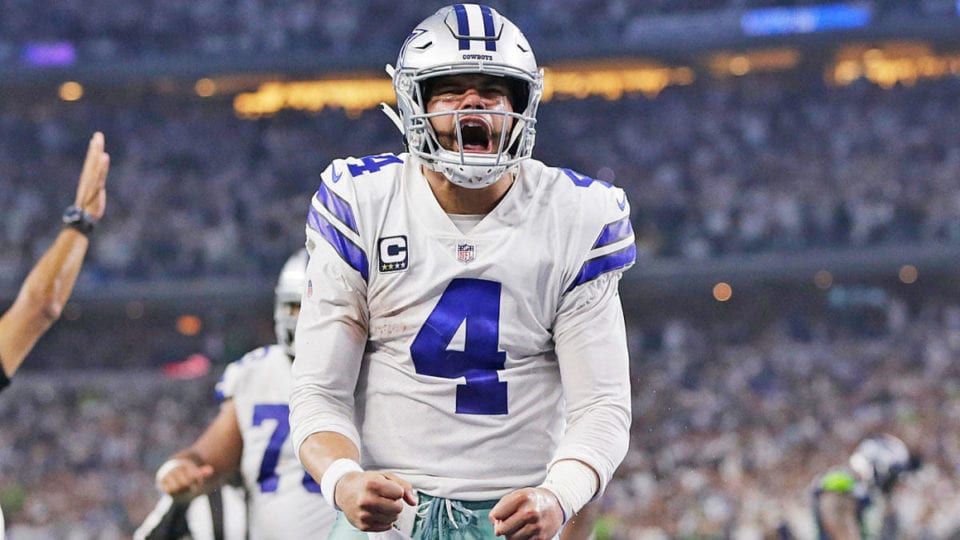 The Cowboys were another team which had a slow start in week 1 with a loss to the Rams, and in week 2 it seemed for a good first half of the game that little was to change. That is, until they overcame the 29-10 halftime score line to win 39-40.
But while it is too easy to pin this comeback purely on the incompetence of the Falcons, one must give credit where it’s due to the Cowboys offensive contributors. CeeDee Lamb was the third receiver taken but became the first to achieve the 100-yard game. Amari Cooper also had 100, and in a week which had seen many of the leagues best backs pick up injuries or drastically underperform, Elliott had 122 total yards and a touchdown.
Forget what was said about Dak last week. The Dak we saw in the second half – the Dak which posted 450 yards and a TD on his way to a huge comeback win and a 120.3 QBR – is the Dak which will be earning a new contract at the end of this season.

The Raiders had a great game offensively versus Carolina in week 1, but they looked like a completely different team in week 2 on MNF as they clinched their first home win in Vegas. They defeated the Saints 34-24 in a game which saw Carr post 284 yards and 3 TDs, and Jacobs contributed 105 total yards as he continues his transition to becoming a receiving back. Most impressive of all however was Darren Waller, who put up 105 yards and a touchdown off 12 receptions and is proving to be impossible to cover. The offense may have stolen the game, but the defense impressed by holding it together against one of the leagues best offenses. Brees may have had 312 yards and a TD against the youthful Raiders, but to hold the Saints to 24 while missing your defensive play caller – that’s something few teams could accomplish.

Perhaps most impressive has been the Raiders depth, and their ability to step up to the challenge. Having lost linemen Sam Young and Trent Brown in week 1, and Richie Incognito out for at least three weeks after week 2, backup Denzelle Good and rookie Jon Simpson stepped up, as the Raiders gave up just 3 sacks. While having room for improvement, the comradery and resilience of the Raiders is showing to be something admirable. 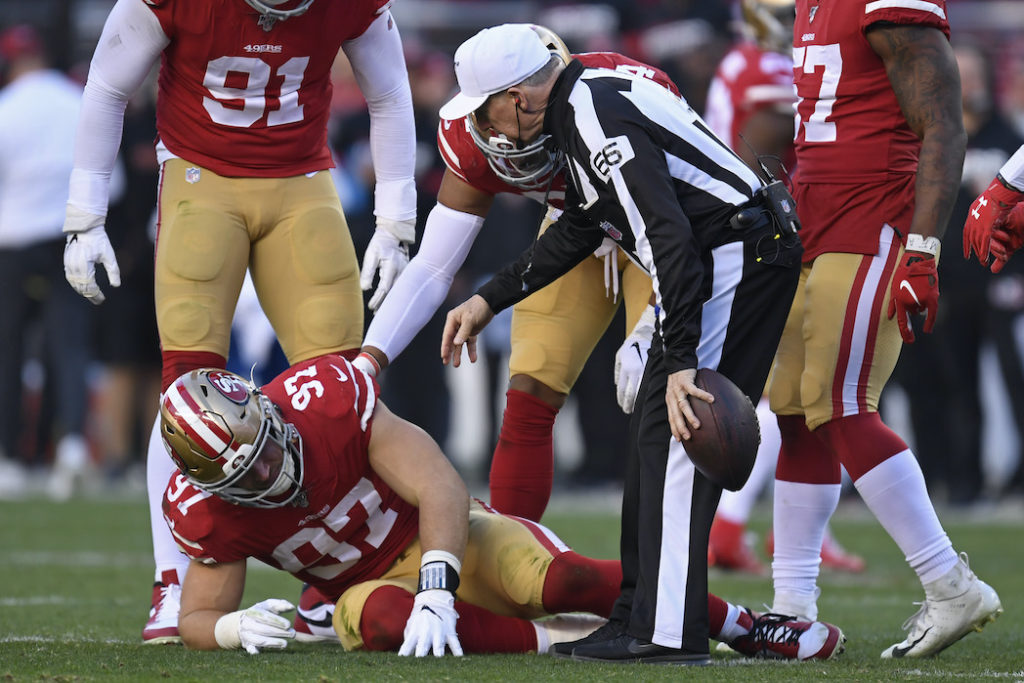 The 49ers did not get the start to the season they would have wanted in week 1, with a loss to the Cardinals and the team experiencing a few starters getting banged up. In week 2, despite getting a big 31-13 win over the New York Jets, the Niners once again land among the leagues ‘losers’ – as on a weekend which saw many of the league’s biggest stars suffer devastating injuries, 5 of these big-names were Niners players.
Nick Bosa, who landed as high as #17 in the NFL Top-100 after a rookie year in which he was named DROY for his 9-sack season, is now set to miss the entire 2020/21 season with an ACL injury – as is 2017 first rounder DT Solomon Thomas, and DE Dee Ford, who currently has no timetable for a return from his back injury. To the Niners credit, they acted quickly, signing former Lions pass rusher Ezekiel Ansah to take Bosa’s place, but losing 3 starters on their D-line is going to leave a huge gap in what has been one of the best defenses in the league.
On offence, the Niners have lost further stars. Jimmy G (who has 390 yards and 4 TDs through two games) left the game in week 2 with an ankle injury, and is likely to miss week 3 against the Giants. Also notable is the injury to running back Raheem Mostert who had 92 yards and a TD on 8 carries prior to the injury – and was replaced by Coleman, who tallied just 12 yards off 14 carries.

The Niners will suffer in coming weeks, with 10 players picking up injuries by just week 2. But, they were able to claim a win in week 2 – giving them a record better than the 11 0-2 teams heading into week 3.

In many ways, becoming the only team to tally 39 points with no turnovers and still lose is an impressive feat – but as it turns out, it’s also one of the easiest ways to be quickly branded a week 2 loser.
The Falcons blew a lead that was reminiscent of the Superbowl, having been 20 points ahead as early as the 2nd quarter, and still leading 29-10 at the half. The Falcons must be the only team capable of blowing such leads.

Like the Superbowl, Matt Ryan played a solid game while the lead stood, throwing for 4 touchdowns. But it all means nothing if the defense can’t hold on to the lead. The Falcons completely lacked urgency in the latter parts of the game, and the onside kick was a clear result of such complacency. At 0-2, they will be lucky to get a win against the Bears or Packers in coming weeks, unless we see some serious changes to their attitude as a unit.

Like the Niners, the Broncos again are being branded ‘losers’. Their week 2 matchup with the Pittsburgh appeared promising, as backup QB Jeff Driskel put up 256 yards and 2 TDs against one of the league’s best defensive units, and rookie Jerry Jeudy showed raised eyebrows with 4 catches for 62 yards. The Broncos came dangerously close to toppling Pittsburgh, losing by a score line of 26-21.

But why do the Broncos again land among the ‘losers’? Well, aside from the fact they are now 0-2, the Broncos are now set to experience receiving issues well beyond the few drops in week 1. They suffered significant injuries to starting QB Drew Lock and WR Courtland Sutton, with rookie Jerry Jeudy set for limited practice, and listed as questionable for week 3. Sutton, who eclipsed 1000 yards in 2019, will miss the entire season with an ACL injury, and Lock’s rotator cuff injury will keep him out for a few weeks, despite it not being as serious as first thought. Denver acted quickly to find a replacement for Lock, signing former Jags and Rams QB Blake Bortles – but its hard to picture the Broncos reaching the heights that many expected them to with Bortles under centre, and seeing as they gave up 7 sacks against the Steelers, the coming weeks won’t be made easy for the newly signed Bortles.