Where does Cooper Kupp’s Season Rank Amongst the Best in NFL History?

Cooper Kupp’s 2021 season is going to go down in NFL history. After securing the regular-season triple crown by leading the NFL in receptions, receiving yards, and touchdowns, Kupp punctuated his season by scoring the go-ahead touchdown in the Super Bowl and securing the MVP. Kupp was already having an all-time statistical season, and now he has captured the Super Bowl ring that has eluded many elite wide receivers before him. Many of the most outstanding wideouts of the last 20 years, including Randy Moss, Terrell Owens, Calvin Johnson, and Larry Fitzgerald, have retired ringless. I wanted to use a combination of the regular season and playoff stats (with playoff performances being heavily weighted) to rank the ten most impactful wide receiver seasons of all time.

Terrell Owens had better statistical seasons throughout his career, but 2004 was probably his most memorable and impactful. The Eagles were nearly unbeatable with TO in the lineup, going 13-1 to open the regular season. However, after Owens broke his leg down the stretch, the Eagles’ offense sputtered, losing their final two games and mustering 17 combined points. Nevertheless, Owens was still a first-team all-pro and finished second in the offensive player of the year, despite missing time at the end of the year. T-O returned for the Super Bowl, where he played on a still broken leg and was unguardable. T-O disproved the diva narrative by risking an injury that could’ve sidelined him for his career. Owens went for 122 yards on the game’s brightest stage against a great Patriots defense despite serious injury.

Julio Jones 6 year stretch from 2014-to 2019 is one of the best peaks we have ever seen from a wide receiver. Over that stretch, he averaged over 1,564 yards per season. Despite the Falcons missing the playoffs, 2015 is the best season Jones had had. Julio went over 135 yards receiving in 8 different games, finishing his season with 1,871 yards. Jones 2015 yardage total ranks 3rd all time and is second among players who participated in a 16 game regular season. 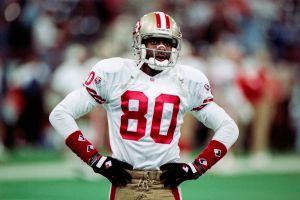 It is tough to differentiate the Jerry Rice seasons because he dominated the sport for 19 years; however, his 1987 campaign stands out. In just 12 regular-season games, Rice found his way into the end zone 22 times and ran in another score to give him 23 total touchdowns, tied for the single-season wide receiver record. If Rice kept up his pace over a 16 game season he would’ve scored 29 touchdowns. His playoff struggles are why this performance ranks where it does, the Niners would go one and done in the 1987 playoffs for the third year in a row, and Rice would tally just 28 yards, but plenty of success for Rice and the 49ers was still to come.

Sterling Sharpe was ahead of his time, and if it weren’t for his career getting cut short, he would be one of the most accomplished wide receivers of all time. He is still one of the best. Sharpe, Rice, and Kupp are the only wide receivers to win the triple crown. Sharpe did so in 1992, but his 1993 campaign where he took the Packers to the playoffs was arguably better once you factor in his playoff performance. Sharpe carried the Pack to a wildcard round victory with 101 yards and three touchdowns, giving his team the lead with a 40-yard score in the fourth quarter, before being sent home the following week despite having a monster game with 128 yards and another touchdown.

Rice secured the triple crown in 1990 and had one of the best single-game performances of all time when he dropped 225 yards and five touchdowns on the Atlanta Falcons. He could be higher on this list, but his 1990 playoff performance fell below his usual standard. Rice didn’t have a massive game in the NFC championship, and the result was a 15-13 loss to the Giants in a game that featured just one touchdown. 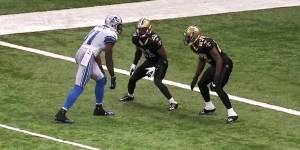 Calvin Johnson was nothing short of dominant in 2011. He opened the season with four straight multi-touchdown games, and with over 1600 yards and 16 touchdowns for the season, he helped the Lions to their first playoff appearance in 12 years. Megatron dominated in the playoffs, but Detroit’s defense unraveled despite a halftime lead, allowing 35 second-half points. Megatron’s 211 yards and two touchdowns were not enough to keep Detroit’s season alive.

2007 Randy Moss is the best regular-season wide receiver we have ever seen. One of the best wide receivers of all time, Moss went to New England in 2007, where he finally met a quarterback that was his equal. Moss and Brady would break pretty much every record in 2007 and finished first and second in the offensive player of the year. Moss’s 1,493 yards and single-season record 23 receiving touchdowns helped lead the Patriots to a 16-0 record. Moss caught a touchdown in all but three games, and the Patriots’ offense scored under 28 points just three times. However, Moss went missing in the postseason and only caught two passes in the AFC playoffs. The Pats still made the Super Bowl, where Moss redeemed himself when he caught the go-ahead touchdown with under 3 minutes left. However, Eli Manning and David Tyree would deny Moss an opportunity to become a super bowl legend. 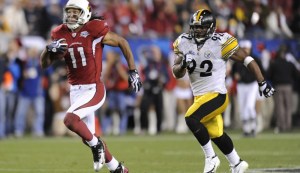 One of the most underrated players to ever play, Larry Fitzgerald, had a stellar 2008 season followed by an all-time legendary playoff run. After helping get the 9-7 Cardinals into the playoffs with an all-pro season, Fitz went nuclear in the playoffs. He opened with six catches for 101 yards and a touchdown and advanced the Cardinals to the championship game the following week with 166 yards and a touchdown. In the NFC championship game, Larry hauled in 9 of 10 targets for 152 yards and three touchdowns. In the Super Bowl, it looked like he would go down in history after his second touchdown of the game; a 64 yarder with under 3 minutes left gave Arizona the lead. It would’ve been a great underdog story if the Cardinals had won, and Larry probably would’ve won MVP. Instead, Pittsburgh answered with a Santonio Holmes touchdown with 35 seconds left to secure their sixth Lombardi. However, Fitz’s legendary playoff run should never be forgotten.

Rice led the NFL in yards and touchdowns in 1989 for a dominant San Francisco 49ers team. After going 14-2 in the regular season, the 49ers won their playoff matchups by scores of 41-13, 30-3, and 55-10. There was lots of competition for Super Bowl MVP on one of the greatest teams of all time, but Rice ultimately secured it by going off for 148 yards and three touchdowns in the big game. Over the regular and postseason, Rice put up 101 catches for 1800 yards and 22 touchdowns. 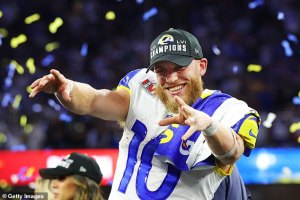 Going into this exercise, I was not planning on putting Cooper Kupp #1, but there is simply nobody that can match his stats and accolades. When you combine playoff receiving yards, Kupp had 2,425 receiving yards this year, destroying Larry Fitz’s previous record of 1,977. Kupp’s stats simply blow everyone out of the water. After winning the triple crown, Kupp maintained his pace in the playoffs putting up 119.5 yards a game and scoring six touchdowns. Kupp winning the triple crown, offensive player of the year, and the Super Bowl MVP is something that we haven’t seen before and probably won’t see again. Leading in yards and touchdowns among players on this list, Kupp almost wins the triple crown among all-time greats, but his 22 total touchdowns rank slightly behind Moss’ 24. Kupp scored two touchdowns in the super bowl, including the go-ahead score, and unlike Larry Fitzgerald and Randy Moss, his defense held on to get the win. Kupp finishes his season with 178 catches, 2,425 yards, and 22 touchdowns and while it may seem weird to say Cooper Kupp just had the greatest season by a wide receiver in NFL history.